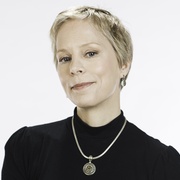 Augusta Read Thomas began piano lessons at the age of four at St. Paul’s School in Concord, New Hampshire. Her teacher often gave her small composition projects, which she says was the beginning of her vocation as a composer. She began playing the trumpet in the third grade. After graduating from high school in 1983, Thomas enrolled as a music major in trumpet at Northwestern University, where she studied with Alan Stout and Martin William Karlins. From 1986 to 1987, she studied composition with Oliver Knussen at Tanglewood, and in 1988 with Jacob Druckman at Yale University. In the meantime, she was accepted to the Royal Academy of Music in London, where she studied with Paul Patterson and obtained a master’s degree.

Thomas was awarded a Guggenheim Fellowship in 1989. At 23, she was the youngest woman to receive this honor at the time. Soon after, she began teaching at the Eastman School of Music, and she received tenure at the age of 33. While at Eastman, she was named Mead Composer-in-Residence at the Chicago Symphony Orchestra by conductors Pierre Boulez and Daniel Barenboim. The longest-serving Mead Composer-in-Residence, she held the position from 1997 to 2006. The orchestra gave the 2007 premiere of her work Astral Canticle, one of two finalists for the Pulitzer Prize for Music.

Shortly after her tenure at Eastman, Thomas returned to Chicago to teach at Northwestern University School of Music until 2008. In 2010, she was appointed University Professor of Composition in the Department of Music at the University of Chicago.

Thomas is invested in programming activities and the life of the Chicago music scene. In 2016, she created and co-curated the Ear Taxi Festival, which has involved over 350 musicians, 88 composers, and 54 world premieres. The two-day festival takes place in Chicago and aims to celebrate the city’s burgeoning contemporary music scene. That same year, she founded the University of Chicago’s Center for Contemporary Composition, conceived as a dynamic, collaborative, and interdisciplinary environment for the creation, performance, and study of new music, as well as for the career development of emerging and established composers, performers, and scholars.

In 2022, she presided over the jury for the Élan Prize at IRCAM’s ManiFeste Festival.

Thomas’s music is firmly rooted in the Western musical tradition. She considers Johann Sebastian Bach a major influence. Her clear, effervescent, and adventurous style of writing is also influenced by Igor Stravinsky, Benjamin Britten, Olivier Messiaen, Luciano Berio, and Boulez. Seeking to subvert the codes of neoclassicism and modernist complexity, she shuffles the cards in her placement of the instruments in the orchestra (Orbital Beacons, which she dedicates to Boulez), and engages a beatbox artist for her opera Sweet Potato Kicks the Sun. Her piece In My Sky at Twilight is halfway between a traditional song cycle and a dramatic cantata.

Her catalog is published exclusively by G. Schirmer, Inc. (for works composed before 2016) and Nimbus Publishing (for pieces composed in or after 2016).