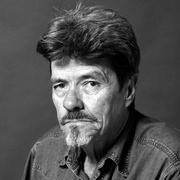 James Tenney was born on 10 August 1934 in Silver City, New Mexico. His musical education began with piano and composition lessons during visits to Arizona and Colorado. He went on to study at the University of Denver, Julliard, Bennington College (B.A. 1958), and the University of Illinois (M.A. 1961). His composition professors included Chou Wen-Chung, Lionel Nowak, Carl Ruggles, Lejaren Hiller, Kenneth Gaburo, and Edgar Varèse.

Upon completing his studies, Tenney worked at the Bell Telephone Laboratories from 1961 to 1964, where he collaborated with Max Mathews on the development of several computer programmes for music composition and synthesis, thereby making an enormous contribution to the burgeoning field of electronic music.

In 1963, Tenney founded the Tone Roads Ensemble, a group which enjoyed considerable success in New York thanks to their performances of the music of Charles Ives, Varèse, Feldman, Ruggles, Cage, and other noteworthy composers of the time. Tenney was the pianist and conductor of the group from 1963 to 1970. He also performed with the ensembles of Harry Partch, John Cage, Steve Reich, and Philip Glass.

Tenney’s pivotal theories on digital synthesis are among his most significant contributions to electronic music. He authored several articles on acoustics, computer music, musical form and perception, as well as two books: Meta/Hodos: A Phenomenology of 20th Century Music and an Approach to the Study of Form (Frog Peak, 1988) and A History of “Consonance” and “Dissonance” (Excelsior, 1988).

He received numerous accolades throughout his career, including from the National Science Foundation, National Endowment for the Arts, Ontario Arts Council, Canada Arts Council, American Academy and Institute of Arts and Letters, Fromm Foundation, and DAAD, as well as the Jean A. Chalmers Prize in 1993 for his work Critical Band.

Starting in 1966, Tenney taught at the Polytechnic Institute of Brooklyn, the California Institute of the Arts and the University of California. From 1976 to 2000, he taught composition, theory, and 20th-century music history at York University in Toronto, where, in 1994, he became the first faculty member to be named Distinguished Research Professor.

James Tenney’s work attempts to address the questions raised by the pioneers of North American experimental music, i.e., Charles Ives, Carl Ruggles, Edgar Varèse, and John Cage. Throughout his career, he remained dedicated to research on sound and perception. As a composer and theorist, he made a massive contribution to the evolution of music after John Cage. He composed for various media, using both acoustic and electronic instruments.