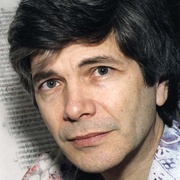 Allain Gaussin was born in France in 1943. At twenty, he abandoned his studies of mathematics, physics, and chemistry for music. In October 1966, he enrolled in the Conservatoire de Paris (CNSMDP), graduating with highest honors in music theory and analysis and honors in composition, which he studied with Olivier Messiaen. There, he discovered the composers who would become his touchstones: Berio, Kagel, Xenakis, and Ligeti. He also studied piano with Hélène Boschi, choir and orchestral conducting with Louis Fourestier, and electroacoustic music with Pierre Schaeffer at the GRM.

From 1981 to 1992, he taught composition and orchestration at the Schola-Cantorum de Paris, and then in October 1991 began teaching in the city conservatories of Paris. He gave lectures and composition classes at the Darmstadt Summer Courses (Germany) in 1986 and 1988, at the University of Osaka (Japan) in 1994, and composition workshops at the Conservatoire de Lyon (CNSMDL) and Paris (CNSMDP) in 1998, where he took over from Marco Stroppa as a professor of composition in 2003-2004. In 2001, he lectured at the Universities of Kyoto and Tokyo. In 2004-2005, he held a research residency at IRCAM for a project on rhythm. From 2000 to 2008, he taught composition and orchestration at the Conservatoire de Sevran; currently, he teaches at the American Conservatory in Fontainebleau. From 2010-2012 he taught at the French Music Academy in Kyoto, and from 2004-2011 he taught orchestration at the Osaka College of Music.

Allain Gaussin was a resident at the Villa Médicis from 1977 to 1979 – where, notably, he composed Eclipse (1978) and Colosseo (1979) – and with the DAAD program in Berlin in 1985. In 1994 he held a residency at the Villa Kujoyama in Kyoto, where his discovery of Japanese culture became a source of inspiration for compositions such as Satori (1998), Jardin Zen (1999), and Tokyo-City (2008). He was awarded the SACEM Prize in 1983 and 1989, and the Fondation de France Prize for Arcane in 1986. He received fellowships from the Foundation Beaumarchais in 1991 and the Orcofi Association in 1992. In 1995, he was awarded the Grand prix International du Disque by the Académie Charles Cros for Irisation-Rituel, Camaïeux, and Arcane. In 1998, he won the ICONS international composition competition prize in Turin for Mosaïque céleste.

Gaussin is also a poet: he writes texts he sets to music – such as Irisation-Rituel (1980) or Les voix de la mémoire (1985) – and has published two collections of poetry: Transes et lumière (1976), with a preface by Olivier Messiaen, and L’attente… L’absolu (2004), which was reissued in German translation in 2009 and released in an expanded edition in 2013. His music and his poetry both directly address the senses. Free of strict structures, parametric compartmentalization, and the serialist tradition, it draws on the powerful energy generated by work on sound matter and the play between tension and release. In L’harmonie des sphères, electronics are used to further hone this work on the sound texture.

Since 2012, he has been Honorary President of the Franco-Japanese Association of Contemporary Music.