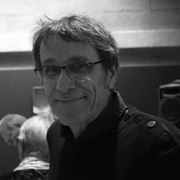 Éric Daubresse was born in France in 1954. He began his musical studies at the Conservatoire de Lille. His initial training in the sciences sparked an interest in electroacoustics and led him to take part in workshops with the Groupe de Recherches Musicales (GRM) organized by the Centre Culturel de Noroit in Arras, where met Guy Reibel. After this, he enrolled in the electroacoustics program at the Conservatoire de Paris, where he studied composition with Ivo Malec.

After graduating in 1985, he helped to found Studio Prémis, designed for the 2e2m ensemble, and joined forces with its percussionist, Alain Huteau, to form Duo Spirale in order to expand the repertoire of works for percussion and electronics through numerous commissions. In parallel, he taught at the Conservatoire de Champigny-sur-Marne.

Éric Daubresse was recruited to join the IRCAM in 1990 by the head of its “Creation” department for a temporary post that, two years later, became a permanent position for what at the time was called a musical asistant and is now known as a computer music designer (réalisateur en informatique musicale, or RIM).

His collaboration with Emmanuel Nunes was an integral part of his work as a computer music designer; he and Nunes were partners in a musical adventure that spanned two decades, from Nachtmusik I, in 1978, to Einspielung I, in 2011, including such works as Wandlungen (1986), Lichtung I and Lichtung II (1991 and 1996). Éric Daubresse developed the technologies used in Nunes’ compositions, in particular the tools that made possible what the composer calls “envelope spatialization.” Daubress also worked with Brice Pauset (A Passion profane, 1999), Marc Monnet (Pan!, 2005), and Philippe Hurel, who dedicated Leçon de choses for electronics and ensemble (1993) and Hors-Jeu for percussion and electronics to Daubress (2006).

In 2006, Daubresse began teaching computer music at the Geneva University of Music and then in 2008 at the IRCAM, in particular teaching composers in the Cursus program and providing support for many of them in producing their work. An expert in sound spatialization, he taught the IRCAM’s Spat program, for which he was the development coordinator. He was also the coordinator for eOrch, a research program at the Geneva University of Music devoted to topics related to computer-assisted orchestration and a partner of the ACTOR international project with IRCAM and McGill University, one of whose libraries was renamed ERIC (Extended Research for Instrumental Composition).

Éric Daubresse died on 29 October 2018 at Necker Hospital in Paris.

Several concerts were performed in his memory in 2019, on 22 January at the Geneva University of Music, on 15 June during IRCAM’s ManiFeste festival, and on 18 June the Cursus composers’ concert.