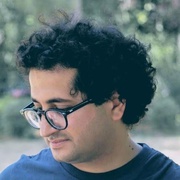 Sina Fallahzadeh was born in Iran in 1981. He earned his master’s degree in piano performance from the Art University of Tehran and then traveled to France to study composition at the Conservatoire à rayonnement régional (CRR) in Paris, the Pôle supérieur d’enseignement artistique Paris Boulogne-Billancourt (PSPBB), and at the Geneva University of Music. In Paris, he studied composition with Gérard Pesson, Édith Canat de Chizy, and Denis Dufour; in Geneva, with Michael Jarrell and Luis Naón. In addition, he studied computer music with Alireza Mashayekhi in Tehran, and with Éric Daubresse in Geneva.

In 2015-2016, he participated in Cursus, (the IRCAM’s composition and computer music course). He is currently pursuing his doctorate in musicology with Pierre Couprie at the Sorbonne, working on a doctoral thesis titled “Metaphysics of Space in the Oeuvre of Marco Stroppa.”

In 2012, he was a finalist in the Métamorphoses competition, and in 2013 he won the Luigi Russolo competition.

The singularity of his compositions comes from the mixing of elements from a rich cultural background with those of modern, contemporary language. These elements are drawn from a wide variety of cultures, eras, and places. For Fallahzadeh, each work represents a deep relationship with culture. He draws inspiration from distant cultural references and images, objects from far away, symbols, and poetry. The morphological development of sound gestures, the evolution of timbre and spatial interactions among different sound layers have a crucial place in his musical composition.

While his music is not directly inspired by Iranian musical traditions, it draws from them in its mode of temporality, its “smooth and continuous time.” Similarly, the unified form of traditional Persian music influences his compositions.

Fallahzadeh has collaborated in many workshops, master classes, and courses with composers such as Franck Bedrossian, Marco Stroppa, Hèctor Parra, and Frédéric Durieux. His compositions have been performed in France, Italy, Germany, Belgium, Switzerland, the United States, Croatia, Estonia, the Ukraine, and Iran, by many international ensembles including 2e2m, Ensemble Itinéraire, the Estonian Philharmonic Chamber Choir, the Orchestre Philharmonique de Radio France, Du bout du Monde, and XelmYa+.