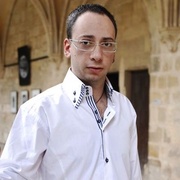 Italian composer born in Taranto in 1981.

Maurilio Cacciatore was born in Italy in 1981. He trained with Fabio Cifariello Ciardi at the Conservatorio di Perugia. After studying piano, composition, and electronic music in Italy and Sweden, along with international communication at the University of Perugia, he graduated from the Conservatoire de Strasbourg in 2008 with highest honors in the class of composer Ivan Fedele and won a SACEM composition prize.

In 2009-2010, he particpated in Cursus I (the IRCAM’s composition and computer music course), while completing advanced training with Ivan Fedele at the Accademia Nazionale di Santa Cecilia in Rome, from which he graduated in November 2010 with the jury’s commendation. His aesthetic and compositional ideas have been shaped by encounters with composers such as Michael Jarrell, Georges Aperghis, and Yan Maresz, and performers such as Armand Angster and Mario Caroli.

Following a performance of his music at the Siren Festival of the University of Gothenburg, Sweden, Cacciatore’s music has been performed in many European countries as well as the United States, South Korea, Japan, and Australia. In 2006, Maurilio Cacciatore was a finalist in the Seoul International Music Competition (South Korea), and the American group Vox Novus selected his composition for a concert series. In 2009, Yakamoz, for piano, won the Povoletto International Composition Competition in Udine, Italy. That same year, Stesso Obliquo for flute vibraphone was a selection of the Egidio Carella Composition Competition. Cacciatore was also awarded the Goffredo Petrassi Composition Prize from the President of the Republic of Italy.

His compositions have been commissioned and supported by major institutions such as the Accroche Note, the Arsenale, the SACEM, the Pomeriggi Musicali Foundation in Milan, and the Artefacts ensemble. In 2008, Les Voix de Strass, conducted by Catherine Bolzinger, recorded his Due Anfibi, for twelve amplified voices. Kyrie was selected by the Fondation Royaumont for the Voix Nouvelles 2010 composition session, where it was premiered by Les Cris de Paris and the Linea Ensemble. The sound installation Apparaître, disparaître, se cacher also premiered there in September 2011. Cacciatore returned to the IRCAM to complete the Cursus II in 2011, where he composed Concerto for MIDI keyboard, ensemble, and electronics, which was premiered by the Ensemble intercontemporain in October 2011. Tamonontamo, commissioned by Les Cris de Paris, premiered at ManiFeste at the IRCAM in June 2012.

As a musicologist, Cacciatore lectures at the Fonoteca Umberto Trotta di Perugia, the Valentino Bucchi Foundation in Rome, the Johannes Gutenberg University of Mainz (Germany), and the University of Seoul, South Korea. He is one of the founders of the Ensemble L’imaginaire of Strasbourg. He teaches composition at the Conservatorio Nicola Sala in Benevento, Italy. His first compositions were published by Arspublica, and, starting in 2010, by Edizioni Suvini Zerboni.