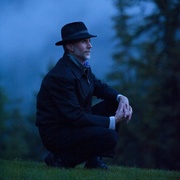 John Luther Adams grew up in New York city and began his study of music as a percussionist. He was fascinated by the music of Frank Zappa, and then discovered Edgard Varèse and Morton Feldman. He studied composition with James Tenney and Leonard Stein at the California Institute of the Arts. In the mid-1970s, he moved to Alaska, where he became involved with the conservation movement. He became the executive director of the Northern Alaska Environmental Center and a percussionist with the Fairbanks Symphony and the Arctic Chamber Orchestra.

From 1994 to 1997, he was a composer-in-residence with the Anchorage Symphony, the Anchorage Opera, and the Alaska Public Radio Network. He served as president of the American Music Center, dedicated to the promotion and support of new American music.

Adams’ music has deep roots in the culture and geography of Alaska; he studied the percussion music and rhythms of the region and has performed some of his work in natural settings, blending with the sounds of the surrounding landscape. Feldman‘s influence can be heard in his expansive, contemplative large orchestra pieces such as Clouds of Forgetting, Clouds of Unknowing (1991-1995) or In the White Silence (1998).

Adams composes for orchestra, chamber ensemble, percussion, and electronic media, and his work has been performed extensively in countries across the globe. The Chicago Symphony, the Radio Netherlands Philharmonic, and the Melbourne Symphony have performed Dark Waves for large orchestra and electronic sounds (2007). Many of his pieces have been played in various outdoor venues. Inuksuit (2009), for example, has been performed in New York City’s Morningside Park as well as other outdoor locations in the United States, Canada, and Australia.

John Luther Adams’ artistic vision, which blends music and geophysics, has garnered him numerous prizes, including the Heinz Award and Northwestern University’s Nemmers Prize in 2010. He is the author of an essay collection, Winter Music (2004), documenting his time in Alaska, and of The Place Where You Go to Listen (2009), a presentation of his installation by the same name at the Museum of the North in Fairbanks, Alaska, which translates geophysical data streams into sound and light. He has taught at Harvard University, the Oberlin Conservatory, Bennington College, and the University of Alaska.