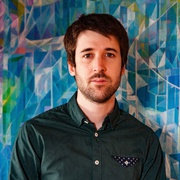 Joan Gomez Alemany was born in Spain in 1990. He trained as a pianist and studied visual art at the Valencia Polytechnic University before traveling to Austria to study composition at the Kunstuniversität Graz with Clemens Gadenstätter; he then returned to Spain to continue his composition studies with Oliver Rappoport at the Conservatori Superior de Música del Liceu in Barcelona. Other formative encounters in his composing career include Mark Andre, Pierluigi Billone, Raphaël Cendo, Brian Ferneyhough, Ashley Fure, Dimitri Kourliandski, Michael Maierhof, Hèctor Parra, Stefan Prins, Yann Robin, Jorge Sánchez-Chiong, Rebecca Saunders, and Mauricio Sotelo, among others.

As he was studying composing, he also took courses and workshops with film directors such as Pedro Costa, Víctor Erice, and Miguel Ángel Baixauli.

He has participated in numerous festivals and masterclasses, including Impuls Academy in 2019 and 2017, the Internationales Musikinstitut Darmstadt in 2018, the Ensems Festival in 2018, the Mixtur Festival in 2018, 2017, and 2016, the Barcelona Modern Project Course in 2018, 2017, and 2016, and the Fourth Conference in Electroacoustic Music at the Conservatorio Katarina Gurska in Madrin in 2016, where he met professors Trevor Wishart and Adolfo Nuñez.

His work often focuses on mixed music, electroacoustic music, and the relationships between sound and image. His music has been performed by groups such as the Multilatérale, Nikel, Schallfeld, IEMA (International Ensemble Modern Academy), JOGV (Jove Orquestra de la Generalitat Valenciana), Container, BCN216, and Morphosis ensembles, in Germany, Austria, Spain, France, and Israel.