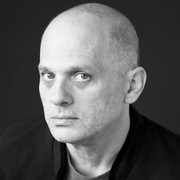 David Lang was born in the United States in 1957. He holds degrees from the Universities of Stanford (1978), Iowa (1980), and Yale (1989). He has studied with Jacob Druckman, Hans Werner Henze, Martin Bresnick, Roger Reynolds, and Henri Lazarof.

In 1987, Lang founded the Bang on a Can collective with Michael Gordon and Julia Wolfe. Each year, the collective, whose three founders also serve as its artistic directors, gives the Marathon concert series in New York, and tours internationally with their ensemble, the Bang On A Can All Stars. Bang On A Can has also commissioned works from numerous composers, including Terry Riley, John Adams, Michael Nyman, and Ornette Coleman.

In 1992, David Lang was composer in residence at the American Conservatory Theater in San Francisco.

Lang’s catalogue of over fifty composition covers all musical genres, from are you experienced?, inspired by the work of Jimi Hendrix, to death speaks, a cycle of songs inspired by Schubert and performed by rock musicians. His the whisper opera, was performed by soprano Tony Arnold, accompanied by members of the International Contemporary Ensemble. His opera anatomy theater, for which he wrote the libretto with visual artist Mark Dion, imagines its audience as eighteenth century spectators of a criminal autopsy. His choral piece the public domain, whose premiere, in August 2016, was conducted by Simon Halsey on the campus of Lincoln Center, brought together more than a thousand volunteer singers.

He has also composed multiple film scores, including Untitled for Jonathan Parker’s eponymous film and simple song #3 for Youth, directed by Paolo Sorrentino.

Lang’s works have been performed by the BBC Symphony, the International Contemporary Ensemble, eighth blackbird, the Santa Fe Opera, the New York Philharmonic, the Netherlands Chamber Choir, the Boston Symphony, the Munich Chamber Orchestra, and the Kronos Quartet.

David Lang has won multiple awards and honors. His the little match girl passion, commissioned by Carnegie Hall for Theater of Voices, received the 2008 Pulitzer Prize for Music. He has also been awarded the Prix de Rome, Musical America’s Composer of the Year, Carnegie Hall’s Debs Composer’s Chair, a Grammy award, and the BMW Music-Theater Prize (Munich).