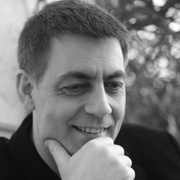 Jean-Luc Fafchamps was born in Belgium in 1960. He studied piano and chamber music at the Conservatoire Royal de Mons and economics at the Université Catholique de Louvain. He is the founder of Musica Libera, an organization that promotes contemporary music, and of the performers’ collective Le Bureau des Pianistes. He is the pianist for the Ensemble Ictus and teaches analysis and music theory at the Conservatoire royal de Mons (now a part of the École Supérieure des Arts, ARTS2).

As a composer, he began writing for small formations in which piano plays a central role (Dynamiques, Melancholia Si…), but his interest in timbre and untempered harmony led him to explore other configurations (A garden, Bryce). He then turned his attention to working on pieces for larger formations using electronics, notably for Les lettres Soufies, a cycle inspired by a Sufi painting that links a system of symbolic interconnections to the twenty-eight letters of the Arabic alphabet, which he began writing in 2000. His goal is to compose twenty-eight pieces corresponding to the letters in this mystical alphabet that will form their own conceptual whole. The cycle is a richly interrelated system in which each piece can be played alone but is linked to all the others, similar to the way single letters can come together to form words.

The Fuga Libera and Sub Rosa labels have each released several monographic recordings of Fafchamps.

Fafchamps was awarded the UNESCO International Rostrum of Young Composers prize for his string octet Attrition (1992), and won the Octave de la Musique classique in 2006. Two of his Sub Rosa albums have won prizes: KDGhZ2SA, A Six-Letter Sufi Word won the Prix Snepvangers at the Caecilia Awards in 2013 (best Belgian music recording) and Gentle Electronics was awarded the Octave de la Musique contemporaine in 2016.