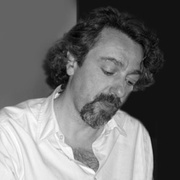 Born in La Plata (Argentina) in 1961, Luis Naón studied music in Buenos Aires from 1971 to 1980 (composition, piano, theory, choir, counterpoint, Gregorian chant, music history, and acoustics), earning two bachelor’s degrees in composition. In 1981, he settled in Paris, where he studied choir conducting with Stéphane Caillat at the Catholic University. He went on to study composition and electroacoustic music with Guy Reibel and Laurent Cuniot at the Paris Conservatoire (CNSMDP) from 1982 to 1985. From 1985 to 1987, he undertook further study of composition with Sergio Ortega at the Pantin School of Music, and with Horacio Vaggione at Paris VIII University. In 2006, he graduated with an advanced degree (DEA) from the latter institution with a thesis on his “Urbana” (1999/2001) cycle.

From his earliest works, Luis Naón sought to articulate the duality of his studio work and his Franco-Argentine identity. This preoccupation has taken many forms, but frequently manifests in associations with other artforms (painting, theatre, architecture). To this end, he has collaborated with visual artist Abel Robino on several multimedia installations since 1997, and with François Wastiaux and the Valsez Cassis Company since 1994 on numerous performance pieces which have been widely performed in France, including at the Avignon Festival, and in Buenos Aires at Teatro Colón. This duality is also present in his writing style (spectral, combinatorial) and choice of genres (acousmatic, instrumental). His catalogue comprises works for orchestra, mixed music with real-time electronics or fixed media, works featuring synthesisers, and installations. His “Urbana” cycle comprises 24 pieces, including the Six Caprices for solo instrument and electronics, commissioned by IRCAM/Centre Pompidou. He collaborated with choreographer Odile Azagury and the Ars Nova Ensemble on Les Princesses, a scenic work commissioned for the opening of the Poitiers Theatre Auditorium.

In 1993, he was a member of the jury for the CIM-UNESCO Prize and the Ashberg-UNESCO Grants, and in 1997 was a representative for the International Rostrum of Composers. He has taught composition and music technology at the Paris Conservatoire (CNSMDP) since 1991, and has appeared at numerous seminars and masterclasses throughout the world. He has also been a composition professor at the Catalonia College of Music (ESMuC) and the Geneva University of Music (HEM) since 2003. In 2020-2021, he is in residency at the Haute école de Musique Vaud Valais Fribourg, Switzerland.