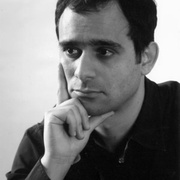 Born in 1971 in Cyprus, Vassos Nicolaou studied musicology, theory, counterpoint, and piano at Aristotle University and the State Conservatory, both in Thessaloniki. He took his first composition lessons with Théodore Antoniou before moving to Cologne to study composition and electronic music with York Höller and Hans Ulrich Humpert. In 2002-2003, he studied with Marco Stroppa, Luis Naón, and Marc-André Dalbavie at the Paris Conservatoire (CNSMDP), graduating with highest honours in orchestration. He attended Centre Acanthes and the Britten Pears Young Artist Programme (Aldeburgh), where he worked with Jonathan Harvey, Philippe Manoury, and Louis Andriessen, and undertook further study in Frankfurt with Beat Furrer. In 2004-2005, he participated in the IRCAM Cursus (IRCAM’s composition and computer music course), allowing him further study with Philippe Leroux, Mikhail Malt, Jean Lochard, and Emmanuel Jourdan.

He has received numerous accolades, including the Giga-Hertz Special Prize (with Pierre Boulez presiding over the jury) and the Bernd Alois Zimmermann Prize from the City of Cologne, as well grants from the International Ensemble Modern Academy, Herrenhaus Edenkoben (on the recommendation of Peter Eötvös), Athens Megaron, Tokyo Wonder Site, and the Weimar Academy of Music (Franz Liszt Fellowship). He has been in residence at IRCAM, ZKM, and CIRM.

In 2008, he was awarded a “Tremplin” commission by the IRCAM/Ensemble Intercontemporain reading panel. He was commissioned by Ensemble Modern to compose a new work in celebration of the 30th anniversary of the founding of the group. A CD of his works for solo piano, recorded by Tamara Stefanovich, was released in December 2009 (edition Klavier-Festival Ruhr).