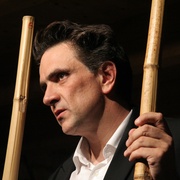 Roland Auzet was born in Cavaillon, France, in 1964. He studied composition with Georges Boeuf and percussion with Gérard Bazus at the Marseille Conservatory. Upon graduating, he went on to study with Gaston Sylvestre at the Rueil-Malmaison conservatory and was awarded a premier prix à l’unanimité (highest honors with a unanimous vote of the jury) and a prix de virtuosité. In 1990, he received first prize in the International Competition of Contemporary Music of Darmstadt, Germany, as well as the Foundation Marcel Bleustein-Blanchet Vocation prize in 1991. He was named a Chevalier des Arts et des Lettres in 2007 and an Officier des Arts et des Lettres in 2016.

As a percussionist, he has performed both solo and in chamber music groups in France and abroad, and premiered numerous pieces, notably with Ensemble 2e2m and at the IRCAM. In 1991, he played the first percussion recital to be performed at the Salle Pleyel in Paris. In 1992, with the Crédit Lyonnais Foundation, he and composer Iannis Xenakis directed a musical drama titled Histoire d’un Faust.

In 1996, he participated in Cursus (IRCAM’s composition and computer music course), which led to the production of OROC.PAT, which was followed by two other pieces composed at IRCAM, Le Cirque du tambour (1997) – a musical theater work that became the name of the theater company he founded - and Schlag! (2003).

These theatrical productions were foundational in Auzet’s work, which seeks to help inject new movement into contemporary thinking about music, to imbue it with color and expand its reach to the broader public while renewing its ties to the tradition of the artistic greats. His Les Chemises de nuit n’ont pas de poches was performed at the Radio France Présence 97 Festival, and in 1997, the French Commission for Education, Science, and Culture nominated him for the UNESCO International Music Prize. He founded the Act-Opus company in 2000, and completed an Espace des Arts residency at the Scène Nationale de Chalon-sur-Saône from 2005 to 2011, with numerous concerts, performances, and premieres of musical theater pieces. As a performer, he has an extensive catalogue of recordings, and in 2007, a box set of his recordings was the first release of the Inactuelles series, distributed by Mode Records in the United States and Tschann Librairie in France.

Most of Auzet’s compositions are for musical theater performances that he designs and directs, including Oscar, Pièce de cirque (Schlag! Opus 2) in 2005, Le Roi Renaud and Théâtre des Opérations in 2007, Katarakt in 2009, Cathédrale de misère and Panama Al Brown in 2010, Mille orphelins based on a text by Laurent Gaudé in 2011, and Ninet’InfernO, adapted from William Shakespeare and Pier Paolo Pasolini.

He was the executive and artistic director of the Théâtre de la Renaissance in Oullins, France, from June 2011 to June 2014.

As a teacher, he has served as director of TOTEM(s), the young artist academy of Chartreuse de Villeneuve-lez-Avignon (Rencontres d’été – Festival d’Avignon), and has lectured in the arts at New York University at Abu-Dhabi, the University of California (San Diego), MacGill University in Montreal, and the Banff Center of the University of Alberta (Canada).