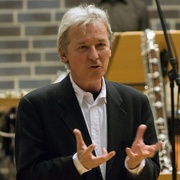 Robert HP Platz studied composition with Wolfgang Fortner at the Freiburg Conservatory, and conducting with Francis Travis. In 1973, he undertook further study in Cologne with Karlheinz Stockhausen.

In 1978-1979, he received a grant from the Heinrich Strobel Foundation (Südwestfunk Radio) which allowed him to travel to the United States and Paris. In 1980, he participated in the IRCAM Cursus (IRCAM’s composition and computer music course). While there, he composed Chlebnicov (1980) for ensemble and fixed media; the work was subsequently premiered at the ISCM Festival in Brussels in 1981.

From 1983 to 2001, he directed the Köln Ensemble (which he also founded), for which composers such as Hosokawa, Huber, Scelsi, Stockhausen, and Xenakis wrote works. As a conductor, he has worked with ensembles and orchestras such as Ensemble Modern, Klangforum, Reihe Wien, Deutschen Symphonieorchester, WDR Radio Orchestra, the SWR Freiburg/Baden-Baden and Stuttgart Symphony Orchestras, Radio NDR Philharmonic (Hannover), Niederrheinischen Symphonikern, Luxemburg Philharmonic, and the Bayerische Staatsoper Orchestra. He has conducted more than 300 world premieres throughout Europe, the United States, and Japan, including at festivals such as Musik der Zeit (WDR), Musica, Metz Rencontres Internationales de Musique Contemporaine, Music Today in Tokyo, and the Holland, Salzburg and Donaueschingen Festivals. He is regularly invited to conduct Ensemble Alternance in Paris and Musica d’Insieme in Milan.

In 1989-1990, a grant from Künstlerhof Schreyahn gave rise to Schreyahn for soprano and chamber ensemble. In 1990, following an invitation from the Rockefeller Foundation, Platz was composer-in-residence at Villa Serbelloni. During a residency in Japan two years later, he composed up down strange charm (1996-1998), a commission of the Akiyoshidai Festival, Schömerhauses Klosterneuburg (Wien Modern), and WDR; the work was premiered in Witten.

His catalogue largely comprises chamber and scenic works, e.g., Verkommenes Ufer, a theatrical setting of a text by Heiner Müller (1983-1986). His work Pièce noire, for ensemble and fixed media (commissioned by IRCAM), was conceived as the final chapter of the large-scale scenic work Dunkles Haus, for voice and chamber ensemble (1990-1991).

Robert HP Platz imagines each of his compositions as a part of a singular, over-arching work, characterised by instrumental spatialisation and a musical syntax based on what he describes as a “polyphony of form.”

Notable in his catalogue is the cycle of chamber works, Wunderblock (2008), comprising next, Kiefer, and Sekundenstücke, and the cycle Branenwelten for solo instruments or chamber ensemble. Part of the latter cycle, sixième opus for piano and electronics, was premiered at the Éclat Festival in February 2012.

Platz has taught composition at the Maastricht Academy of Music since 1990. Additionally, he has appeared as a guest lecturer in numerous countries, and has led masterclasses in Darmstadt (1986, 1996, and 2002), Japan, Poland, the Netherlands, and the United States. He has been the Artistic Director of the Schreyahn Autumn Festival since 2000, and a member of the Wallonia Musical Research and Pedagogy Centre (CRFMW) in Liège since 2005.