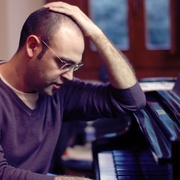 Pasquale Corrado was born in Italy in 1979. He holds degrees in piano, vocal music, and choral conducting and graduated with distinction from the Conservatorio Giuseppe Verdi with degrees in composition, which he studied under Alessandro Solbiati, and orchestra conducting, which he studied under Daniele Agiman. In 2009, he continued his composition studies with Ivan Fedele at the Accademia Santa Cecilia in Rome, and in 2010, studied at the Conservatoire de Paris (CNSMDP) with Stefano Gervasoni while participating in Cursus 1 (the IRCAM’s composition and computer music course).

He has served as director and musical arranger for the RAI National Symphony Orchestra, and for Suoni del sud, where he has directed several concert series, and the Umberto Giordano Symphony Orchestra in Foggia. He has also conducted for many Italian orchestras, particularly in the lyrical repertoire, in concerts featuring both his own work and that of other composers who inspired and taught him, such as Fedele, Solbiati, Francesconi, and Gervasoni.

The majority of Corrado’s catalogue features compositions for chamber orchestra or small ensembles, and he favors formations of flute, clarinet, piano, percussion, violin, and cello, as may be heard in pieces such as Inciso (2009), Ombra di macramé (2010), and Pulse (2012). This formation, he feels, is ideal for contemporary music because of the breadth of timbre it allows. Timbre is also a key element when he describes the composers who inspired him, such as Durieux, Mantovani, Lachenmann, and Benjamin, because of what he sees as their ability to draw a broad palette of timbres from a limited range of instruments. Moreover, Corrado considers music’s rhythmic aspect to be its most important, a preference one hears in Pulse, composed for France Musique’s Création Mondiale, and in Grain (2013), which was performed at ManiFeste in 2014. Both pieces are tributes to pulsation, inspired by Yan Maresz, and in particular his piece Entrelacs (1998).

Corrado has written four lyric operas: Mr Macbeth (2013), Alice Special Guest (2014), Donizetti Alive (2015), and Babbelish (2018). He has also composed for original film scores and for multimedia installations. In 2019, he founded the Syntax Ensemble, for which he serves as director. He is also producer and arranger for Caterina Caselli’s label Sugarmusic; he aranged several pieces for Caselli for the Sanremo Festival.

He has received commissions from the Ensemble Intercontemporain, the IRCAM, the Venice Biennale, Radio France, Divertimento Ensemble, the Festival Acanthes-Metz, and the Santa Cecilia orchestra and choir in Rome. His pieces have been performed in festivals such as ManiFeste, MusikProtokoll Graz, and the Festival Pontino, by ensembles including the Orchestre Philharmonique de Radio France, Instant Donné, Klangforum Wien, Quartetto Prometteo, and Ensemble Multilaterale. He won the Petrassi Prize in 2011 and the Basel Composition Compeition in 2017.

He teaches composition at the Conservatorio Fausto Torrefranca in Vibo Valentia and is published by Suvini Zerboni Milan.