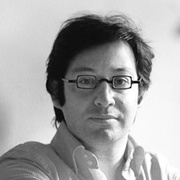 Oscar Strasnoy studied piano, conducting, and composition with Laura Baade and Guillermo Scarabino at the Conservatorio Nacional Superior de Música in Buenos Aires. He traveled to Europe in 1991 to undertake further study with Michaël Levinas, Guy Reibel, and Gérard Grisey at the Paris Conservatoire (CNSMDP) and Hans Zender at the Frankfurt Hochschule für Musik.

Alongside his work as a composer, Strasnoy is active as a pianist and conductor. With countertenor Daniel Gloger, guitarist Pablo Márquez, contrabassist Eric Chalan, and percussionist Gabriel Said, he founded the Ego Armand Quintet. He was Musical Director of the CROUS Orchestra in Paris from 1996 to 1998, and has served as a guest conductor with Ensemble 2e2m, the Orchestre National d’Ile de France, and the Radio France and Nice Philharmonic Orchestras.

As a composer, he has received numerous grants and commissions from European and North and South American institutions, including the French Cultural Ministry, Mozarteum Argentino, Harvard University, Kulturstiftung des Bundes (Germany), the Guggenheim Foundation, and the Nadia Boulanger Foundation. His works have been performed at IRCAM, Musée d’Orsay, Strasbourg Musica Festival, Wigmore Hall, Aix-en-Provence Festival, Hamburg Opera, and the Opéra Comique in Paris by, among others, the Berlin and Radio France Philharmonic Orchestras.

Theatre is at the heart of Strasnoy’s creative identity. His opera Midea, based on a text by Irina Possamai and performed in 2000 at the Teatro Caio Melisso (Spoleto, Italy) and the Rome Opera in 2001, was awarded the Orpheus Prize by Luciano Berio in 2000. Subsequent works of note include the cantata Hochzeitsvorbereitungen (2000), in which Strasnoy imagines a dialogue between Bach and Kafka (the recording of this piece was awarded the Académie du Disque Lyrique Prize); Ephemera (2000), a preparatory work for L’instant (2007); Opérette (2002) and Geschichte (2003), both settings of texts by Witold Gombrowicz; Fabula (2005) for countertenor and viola d’amore, a setting of a text by Alejandro Tantanian; Le bal (2008-2009), a commission of the Hamburg Opera; Cachafaz (2010), the “barbarian Tragedy of Copi,” directed by Benjamin Lazar and premiered at the Cornouaille Theatre in Quimper, with subsequent performances at the Paris Opéra comique; Случай/Fälle (2012), commissioned by the Bordeaux Opera; La Boîte (2013), commissioned by the Bouffes du Nord Theatre (Paris) and the Grand Theatre of the City of Luxembourg; Requiem after William Faulkner (2014); and the operas Comeback (2016) and Luther (2017), both with librettos by Christoph Hein.

Strasnoy also composes instrumental and vocal music which resonates with his lyrical and theatrical works, often comprising dialogues and montages of structures which he described as “urban” in his article Les stratifications de la mémoire (2e2m, coll. “À la ligne”, 2009). In this vein, he constructed his Bloc-notes series, made up of Ephemera and Midea, and the orchestral cycle Sum, comprising Scherzo (2005), The End (2006), Incipit and Y (both from 2011).

Recent accolades include the SACEM Grand Prix in 2010 and the SACD “New Musical Talent” Prize in 2011. Strasnoy taught composition at Acanthes in 2011 and was the featured composer at the Radio France Présences Festival in 2012, in which a retrospective of his catalogue was presented over 14 concerts at the Théâtre du Châtelet. In 2013, he was awarded the Francis and Mica Salbert Prize by SACEM.