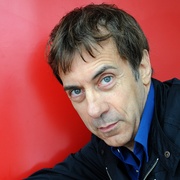 Nicolas Frize was born in France in 1950. He began his musical career studying piano and then studied composition with Pierre Schaeffer at the Conservatoire de Paris; subsequently, he traveled to New York on a Villa Médicis Hors Les Murs fellowship to work as an assistant to John Cage.

In 1975, he founded Les Musiques de la Boulangère, an organization dedicated to musical creation, production, teaching, research, and dissemination. To this end, the organization strives to foster the practice of music by groups and among amateurs, an approach Frize has favored extensively in a catalogue that includes orchestral, instrumental, choral, electroacoustic, and mixed compositions, often for very large ensembles. Frize’s Concert de baisers (1983), for example, was written for a choir of three hundred “kiss instrumentalists,” while Concert de savants (1987) is for a two-hundred-person choir and tape; Rêves de hotte (2002) included twenty performers and an instrumentation of 750 noisemaking children’s toys. Frize’s compositions are built around the participation of non-professional singers and performers, and use a unique participative approach that means they can be re-performed, but never reproduced.

This understanding of composition, which places the performer’s personality at the core of the musical practice, is highly perceptible in Frize’s installations, which are another major feature of his work. The composer frequently holds artistic residencies during which he prefers to start things off from a “place of incompetence,” inhabiting spaces over the long term: his residency at the Manufacture de Sèvres lasted from 2006 to 2009; he spent two years, from 2012-2014, at the PSA Peugeot Citroën factory in Saint-Ouen; and occupied the National Archives in Pierrefitte from 2014 to 2015. He inhabits spaces as a “public earpiece,” finding ways for the people who normally occupy them to hear the sounds of their own presence, their professional practices, and in this way to engage in a kind of reflective listening. Usually, these residencies culminate with an installation that recreates these sound environments, in which Frize focuses on routes and pathways, the idea being that physical mobility is a springboard for intellectual mobility. His recent collaboration with Robin Meier mobilizes these ideas in a sound creation for the University of Amiens, renovated by Renzo Piano, for which Frize was the first composer to receive funding from the 1% artistique program of the French Ministry of culture.

Concern for the common good and for community building are common threads in his catalogue and his approach, perceptible in the attention he gives to work, to care, and to teaching. Notably, Frize has done a significant amount of work in and around prisons, and is head of the Prison Commission for the French Human Rights League; in 2004 he published a book on the subject titled Le sens de la peine: état de l’idéologie carcérale, on the meaning of punishment and the state of carceral ideology.

Nicolas Frize rejects the concept of posterity, preferring to allow his work to disappear when he does; for this reason, his pieces are not recorded and his scores are written so that they can only be performed in his presence.

In June 2021, his Barthes Performance premiered at the Centre Georges Pompidou during IRCAM’s ManiFeste festival.