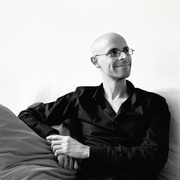 Italian composer born in 1975 in Venice.

Mauro Lanza was born in Italy in 1975. He studied piano at the Conservatorio B. Marcello in Venice and music theory and musicology at the Université Ca’ Foscari, and trained with Brian Ferneyhough, Salvatore Sciarrino, and Gérard Grisey. He was awarded first prize at the Valentino Bucchi International Composition Competition (Rome, 1996) and at the Carlo Gesualdo da Venosa International Composition Competition (Potenza, 1998). In 1998, he was selected by the Ensemble intercontemporain and IRCAM reading committee to participate in Cursus (IRCAM’s composition and computer music course).

Lanza is a Research Composer and Instructor at IRCAM. In 2004-2005, he was a guest professor at McGill University in Montreal. He has given master classes at the Paris, Cagliari, and Cuneo conservatories, where he continues to teach in the music and new technologies program. He regularly participates in research with IRCAM in the fields of physical modeling synthesis and computer-assisted composition. Between 2010 and 2013, he was also a composition advisor for IRCAM’s Cursus program. He currently teaches at the Universität der Künste Berlin.

In 2003 and 2004, the IRCAM and the Archipel festival devoted three concerts to his work. In 2004, he received a commission from the Opéra de Paris and IRCAM to compose music for choreography by Angelin Preljocaj, for which he wrote Le songe de Médée. His collaborative work with videographer Paolo Pachini led to an artist residency at the Studio du Fresnoy, resulting in the piece Descrizione del Diluvio in 2008.

Mauro Lanza held a residency at the Civitella Ranieri Foundation in 2006, at the Villa Medici in Rome in 2007-2008, and at the Akademie Schloss Solitude from 2009 to 2011. Schloss Solitude commissioned his Vorspiel (2010) and La bataille de Caresme et de Charnage (co-commissioned with Ensemble Sillages, 2012). His double string quartet, Der Kampf zwischen Karneval und Fasten, premiered in a performace by the Arditti and Jack quartets at the Witten festival in 2012.

Playful and often mischievous, Lanza’s writing seeks both distance and rigor, mixing traditional and electroacoustic instruments with a range of unexpected sound sources, such as toys or unusual devices, for example his rain machine, around which the musical discourse of Nubi non scoppiano per il peso (2011) is built, or the computer-directed augmented home appliances used in his cycle Systema naturae (2013-2017), created in collaboration with composer Andrea Valle.

His scores are published by Ricordi.