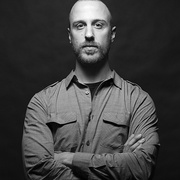 Mark Barden was born in 1981 in Cleveland, OH (USA). He studied composition with Lewis Nielson and Randolph Coleman and piano with Monique Duphil at the Oberlin Conservatory of Music, graduating in 2003. He spent a year abroad on a Thomas J. Watson fellowship before deciding to relocate permanently to Europe. From 2005 to 2007, he took private lessons with Rebecca Saunders in Berlin. With a grant from the Oscar und Vera Ritter-Stiftung, he undertook a masters in composition at the Hochschule für Musik Freiburg under Mathias Spahlinger and Jörg Widmann, which he completed in 2011. In 2017, he received his doctorate in composition from Goldsmiths, University of London. His doctoral thesis, titled “Composing in and through the Body” was supervised by Roger Redgate.

He has received numerous awards and honors, including a scholarship prize to the Darmstadt Summer Academy, artist residencies from the Berlin Academy of the Arts, and the German Studies Center in Venice, the 2016 Composition Commission from the Bavarian Academy of Fine Arts, and the Composers’ Prize from the Ernst von Siemens Music Foundation.

His works have been performed by ensembles such as Klangforum Wien, Ensemble intercontemporain, Ensemble Recherche, the Mivos Quartet, KNM Berlin, and Ensemble Mosaik and at contempoary music festivals in Donaueschingen, Witten, Darmstadt, Paris, Berlin, and New York.