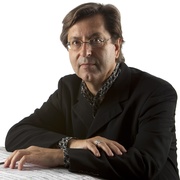 French composer and conductor born 18 May 1957 in Reims.

Laurent Cuniot was born in Reims in 1957. He trained as a violinist and in 1974 enrolled in the Conservatoire National Supérieur de Musique et de Danse de Paris. In 1976, he studied composition and musical research with Pierre Schaeffer and Guy Reibel at the CNSMDP and with the Groupe de Recherche Musicale. The following year, Cuniot, Denis Dufour, and Yann Geslin formed the trio GRM+, initially launched by François Bayle (the then-director of the GRM).

In 1978, he became assistant professor in the class of Guy Reibel and Pierre Schaeffer at the CNSMDP.

In 1986, he turned the GRM+ Trio into the Ensemble TM+, serving as its musical director. During this period, he composed several works nourished by his dual practice of composition and electroacoustic music, including L’exil au miroir for six male vocalists and tape, the chamber opera Cinq pièces pour Hamlet, and La Lice des nuits for large orchestra and two synthesizers.

From 1987 to 1992, he worked as a producer of Radio-France’s “concert-lectures,” public broadcasts devoted to the performance and analysis of music from the middle ages to the contemporary era.

In 1991, he was appointed professor of composition and new technologies at the CNSMDP, alongside Luis Naón and Yann Geslin.

He expanded his activity as a conductor starting in 1994, and in that year conducted his first symphony with the Orchestre Philharmonique de Radio France.

In 1996, the TM+ Ensemble was offered a residency at the Maison de la Musique in Nanterre.

In 2001, he left his teaching post at the CNSMDP to devote himself full-time to composition, conducting, and the TM+ Ensemble. Since then, he has worked to raise awareness of musical creation and to bring it to a wide variety of audiences. In 2013, he began teaching composition at the Conservatoire à Rayonnement Régional de Rueil-Malmaison.

In June 2015, TM+ premiered Cuniot’s Reverse flows for viola, ensemble, and electronics during the IRCAM’s Festival ManiFeste. Three years later, he used this piece as the basis for an acousmatic suite in honor of the 50th anniversary of the composition and new technologies course at the CNSMDP. In January 2021, the ensemble TM+ did an online concert, where they placed his work Une for percussion in perspective with the musical world of Franz Liszt.

He has been awarded the SACEM’s composition prize on multiple occasions (1983, 1989, and 2006) as well as the Tornov-Loeffler Award of the French Académie des Beaux Arts (2009).