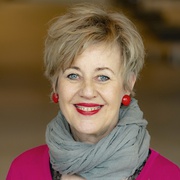 Iris ter Schiphorst started learning piano at an early age. At 22, she also took up the bass and drumkit. She went on to study theatre and philosophy in Berlin, while also attending classes led by Dieter Schnebel, Luigi Nono, and Helga de la Motte-Haber. With decades of experience performing in pop/rock bands as a pianist/keyboard player, bass player, drummer, and sound engineer, at the age of 40, Schiphorst became a self-taught composer.

Drawn to the writings of Derrida and Barthes, as well as Hélène Cixous, Eva Meyer, and the linguist Luce Iriguaray, Iris ter Schiphorst’s music shows a preoccupation with connections between music and speech. She collaborated with Helmut Oehring, whose parents were deaf-mute, on the composition of some fifteen works specifically intended for a deaf-mute audience, including the theatrical music pieces Bernarda Albas Haus (1999), EFFI BRIEST (2000), Mischwesen (1998), Polaroids (1996), and rumgammeln + warten (2001). Through the use of sign language in her works, ter Schiphorst seeks to re-connect language with its graphic origins.

Inspired by Lacan’s research on the perception of otherness, ter Schiphorst often attempts to unify her interest in language and her political activism. This is notably the case in her work Das Imaginäre nach Lacan (2017), in which a number of performers, defined by their costumes as “Westerners” and “non-Westerners,” collectively recite a series of ancient Arabic poems, thereby questioning the nature of the audience’s receptiveness to them according to archetypal prejudices.

Schiphorst also regularly addresses politics and inequality in her work. For example, Zerstören I [Destruction] (2005) for ensemble is a musical response to the attacks on the World Trade Center, while …meine-keine Lieder/die Aufgabe von Musik (2014) examines the intellectual climate under the Nazi regime through the use of the poetry of Inge Müller. She later addressed the issue of free speech in Assange: Fragmente einer Unzeit (2019) for female vocalist, ensemble, and sampler, a work which explicitly expresses support for the Wikileaks founder. In this vein, she has also directed documentaries, including Volk unter Verdacht [People under Suspicion], which examines the methods of the Stasi in the DDR.

She has worked with ensembles including the London Sinfonietta, Ensemble Modern, Ensemble Recherche, Ictus, Mosaik, Neue Vokalsolisten, BIT-20, Musikfabrik, Ascolta, and the Arditti Quartet. She has been awarded numerous prizes and grants, including the Prize for Female Artists from the City of Heidelberg (2015). In 2013, she became a member of the Berlin Academy of the Arts, and since 2015 has taught multi-media composition at the Vienna University of Music and Performing Arts (MDW).

Her works are published by Boosey & Hawkes, Berlin.