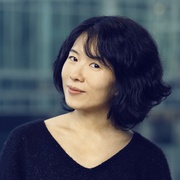 Huihui Cheng was born in 1985 in Wu-Chang, in the province of Hei-Long-Jiang, in Northeastern China. After studying composition with Guoping Jia at the Central Conservatory of Music in Beijing, she went on to specialize in electronic music composition at the Stuttgart University of Music and Performing Arts, studying with Marco Stroppa and Piet Johan Meyer. In 2015, she participated in Cursus (the IRCAM’s composition and computer music course), where she studied composition with Hèctor Parra Esteve.

Between 2016 and 2018, she attended the Academy of the SWR Vocal Ensemble and the Deutsche Bank Stiftung’s Akademie Musiktheater Heute. During this period she held many artistic residencies, notably with the Schöppingen, Baden-Würtenberg, and Schloss Wiepersdorf Foundations in Germany, the Royaumont and Camargo Foundations in France, and the Villa Massimo-Casa Baldi in Italy. More recently, she was awarded a fellowship from the Baden Wüttemberg Art Foundation.

Her interdisciplinary work draws on voice, instrumentation, electronic music, and theater arts. Using visuals, objects, installations, random operations, and electronics, Huihui Cheng plays with the relationship between costume and performance with the goal of expanding the expressive potential of music. In Me Du Ça, the piece for soprano and live electronics she composed for Cursus, the composer created an augmented headpiece for the singer in order to recreate the mythic figure of the Medusa. Messenger,, for piano, also expands on this exploration of different interactions between costuming and instrumentation: the pianist is attached to the piano by cords and strings, creating a “prepared upright piano.”

Huihui Cheng also collaborated on the CoSiMa project with the IRCAM’s Interaction Sound Music Movement (ISMM) team and with the researcher and developer Benjamin Matuszewski on a participative performance concept that makes use of the audience’s smartphones.