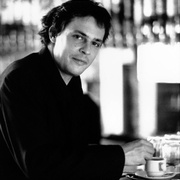 Hannes Löschel was born in Austria in 1963 and began playing piano at a very young age. He studied piano, jazz piano, composition, and arrangement at the Hochschule für Musik in Vienna. During his studies, with the encouragement of his piano teacher Ursula Kneilhs, he explored compositions by Feldman, Cowell, Cage, Boulez, and Messiaen, and became interested in the American art and music scene of the 1950s, 60s, and 70s (Robert Rauschenberg, Mark Rothko, Jackson Pollock), as well as in European and American cinema - all fields he describes as having an influence on his work.

After his studies, Löschel began working as a professional performer of contemporary music, particularly Austrian and American music, as a solo and ensemble artist.

In the early 1990s, Löschel grew increasingly interested in improvisation and expanded his activities as a composer, an improvisor, ensemble conductor, and arranger in a variety of fields, including jazz, electronic music, and improvisational music. In 1995, he founded the Austrian trio Löschel Skrepek Zrost with Paul Skrepek and Martin Zrost, and in 1997 the group won the Hans Koller prize for the jazz and improvisation album While You Wait.

He has received commissions from the Koehne Quartett, the Janus Ensemble, the ORF-Radio-Symphonieorchester Wien, the WDR, the Bregenzer Festspiele, the Musiktrienale Köln, Wien Modern, Wiener Volksliedwerk, Jazzfestival Saalfelden, the Diagonale Film Festival, and the Glatt & Verkehrt festival.

In 2000, he launched the Loewenhertz record label, at first as a way to publicize his work as a pianist and a composer, as well as to showcase his diverse work in experimental, electronic, and jazz music. Soon after, he opened the label to other musicians working in the same vein.

From 2010 to 2011, he was a composer in residence with the Wiener Odeon theater, creating three scores for silent films (Masken. Spiel, Liebes. Nest, Bild. Störung) that were performed during the Odeon Musik festival in Vienna.

His chamber opera Nemesis, produced by the Sirene Operntheater, premiered in 2016 at the Kammeroper du Theater an der Wien as part of a trilogy titled Hospital, along with two other operas, Hybris, composed by Simon Vœsecek, and Soma, composed by Christof Dienz.

Hannes Löschel received a fellowship from the Austrian government in 2001, the Staat-Stipendium in 2000, 2002, and 2004 from the city of Vienna, and the Publicity Award in 2006 from Austro Mechana.