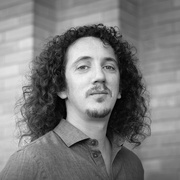 His recent compositions are strongly influenced by research on instrumental gestures as a basis for the creation of a musical discourse, either in terms of the relationship between the performer and electronic sounds, or in purely acoustic works. This research places a strong emphasis on the notion of energy (exerted by the performer, received by the listener), be it in terms of the coordination of sonic densities, of virtuosity, or of the purging of sounds until only a singular vibration remains. His musical language transposes the traditional idea of tension-release into the realm of timbre, moving between noise-based textures and pure tones, and frequently employing microtonality. His works which make use of electronics are characterised by a “degradation” of the material performed by the instrumentalist(s), culminating in concrète deformation—or a “hybridisation”—of the instrument itself.

Rotella’s dual role as pianist/composer with Ensemble Regards has allowed him to intensively research the connection between instrumental gestures and musical notation, as well as to explore the notion of sonic hybridisation, notably through the composition of a work for two augmented pianos whose premiere is scheduled to take place in 2021 as part of a Franco-Italian project.

His catalogue comprises a number of vocal works, including two operas and several pieces for voice and ensemble. As a performer, in addition to standard works for piano solo and chamber formations, he has premiered many new works of contemporary music, either as a soloist or as a member of various chamber ensembles.

Didier Rotella holds a pedagogy degree (CA) in piano. He was a resident at Villa Medici and Casa de Vélazquez. As a composer, his works have been performed by ensembles such as Intercontemporain, Links, Divertimento, Neue Vocalsolisten, the Orchestra of Graduates of the Paris Conservatoire, Ensemble Orchestral Contemporain, Moscow Ensemble Modern, the Diotima and Tana Quartets, Ensemble Regards, Ensemble Proxima, etc. As a pianist, he has performed in France and abroad, including performances as soloist in works such as Prokofiev’s Piano Concerto No. 3 and Rachmaninoff’s Piano Concerto No. 3.

His works are primarily published by Impronta Verlag U.G, and are also available on BabelScores.