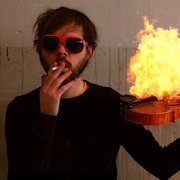 Alexander Schubert studied computer programming and cognitive sciences from 2002 to 2006 at the University of Leipzig, and then multimedia composition with Georg Hajdu and Manfred Stahnke at the Hamburg Hochschule für Musik und Theater, graduating with a Master’s degree in 2010. His thesis (still in progress) is focused on composition using gesture capturing. In 2016, he was a visiting professor at Folkwang Universität in Essen.

In addition to his work as a composer and researcher, Alexander Schubert is active as a performer, programmer and organiser. He is a founding member of Decoder Ensemble, founder and organiser of the Ahornfelder Festival of Electronic Music in Leipzig, and director of the Ahornfelder record label. Since 2011, he has taught live electronics at the Lübeck Conservatory, where he also directs the electronic music studio.

His music is characterised by combinations of different styles (hardcore, free jazz, techno) with concepts from contemporary music. He explores all possible connections between acoustic and electronic music. His works for fixed media and his scores for live electronics make up as much a part of his creative output as the computer programmes he develops or his intuitive use of instruments in improvisatory settings. Recent works such as A Perfect Circle and Unity Switch (2019) make significant use of visual and sensorial elements, notably employing virtual reality technology, and make extensive use of artificial intelligence (Holo_Acid.MOV (CRYPT-File), Convergence, 2021).

His music has been performed by ensembles including Ictus, Nadar, Intégrales, Mosaïk and Decoder, and soloists such as Barbara Lüneburg and John Eckhardt.