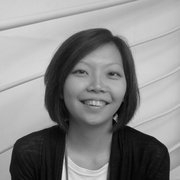 Born in Singapore, Diana Soh completed her studies in composition at Buffalo University under the tutelage of David Felder. After participating in the first year of the IRCAM Cursus (IRCAM’s composition and computer music course), where she notably studied with Mauro Lanza, Soh was selected to participate in the second year of the Cursus in 2012.

Her work explores the interactions between performance and notation, and is characterised by interruptive oppositions between surface activities and passivity. Her music has been performed at important new music festivals including Takefu (Donc ce sera…, 2009), Royaumont Voix Nouvelles (Extremely Loud and Incredibly Close, 2009), Acanthes, Donaueschinger Musiktage, Unerhörte Musik, and June in Buffalo (Flashed and Forgot, premiered in 2009 by the New York New Music Ensemble), as well as in Singapore, New York, and Great Britain (Tête-à-tête Opera Festival). Premiered at St. Luke’s by the Arditti Quartet in 2007, [Ro]ob[ta]ject[tions] was selected for the Gaudeamus Prize in 2011, and was the focus of a radio show on BBC Radio 3.

Diana Soh has worked with performers and ensembles including James Avery, Magnus Andersson, Ensemble NEO Norbotten (which premiered The Vociferated Void in 2008), Tony Arnold, Berlin PianoPercussion (In a vision, or in none, 2008), Tosiya Suzuki, Ensemble Cikada (Case of Crosssightedness, 2010), Ensemble Mosaik (Crosssightedness, 2010), the ZOO dance company (Worshippers of the Machine, 2012), Court Circuit, Klangforum Wien, and the Arditti Quartet.

In 2012-2013, Soh was composer-in-residence for the pedagogical and new music initiative, “Chamber music department meetings”, organised by the Ivry-sur-Seine Conservatory (France) and Muse en Circuit, with support from Adiam94 and Ariam.

In 2011, her chamber opera The Boy who lived down the lane was premiered. In May 2013, the Muse en Circuit Extension Festival presented a portrait concert of Soh’s works, including the premiere of the commissioned work If I were… for wind quintet and electronics. In June 2013, Court-Circuit Ensemble premiered a piece for soprano, ensemble and electronics at ManiFeste in Paris.

In 2019, she was composer-in-residence with Divertimento Ensemble. At the same time, she was working on an opera and participating in the AZ Project with singer Élise Chauvin and the KDM Trio.