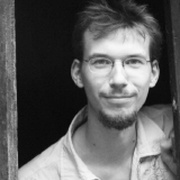 French composer born in Nantes in 1980.

Following training as a pianist, Nicolas Mondon studied piano accompaniment with Maciej Pikulski, Jeff Cohen, and Noël Lee, and “generative improvisation” with Alexandros Markeas at the Paris Conservatoire (CNSMDP). Later studying with Gérard Pesson and graduating with a Master’s in Composition from the same institution, he undertook further study with Horatio Radulescu, Michaël Levinas and Philippe Leroux, and participated in the two years of the IRCAM Cursus (IRCAM’s composition and computer music course).

His works have been performed by ensembles such as Cairn, Instant Donné, Berlin Kammerensemble Neue Musik, Contrechamps, and the Pasdeloup Orchestra. He has received grants from the Meyer and Tarazzi Foundations, and was awarded an Incentive Prize from the French Academy of Fine Arts in 2010. He is interested in extra-European musical traditions (notably those of the Far East), and frequently composes for prepared piano.

Nicolas Mondon teaches music at the Vitry-sur-Seine Conservatory (in the south-east of Paris).