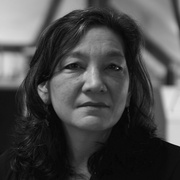 Canadian composer and visual artist born in 1967 in Toronto, Ontario.

Chiyoko Szlavnics graduated from the Faculty of Music at the University of Toronto in 1989. From 1994 to 1997, in the same city, she took private lessons with the composer James Tenney. Then in 1998 she moved to Berlin, where she has lived ever since.

Szlavnics composes for a wide variety of instruments and ensembles, often combining them with sine waves. Heir to Tenney and Ivan Wyschnegradsky, Szlavnics explores the acoustical phenomenon of beating, highlighting it with her particular use of sustained notes, glissandi, densification of sound, prolonged silences, microtonality, just intonation, and combinations of acoustic instruments with electronics.

Szlavnics takes a visual approach to developing her experimental pieces. Since 2003, she has used her own drawings as the starting point for her compositional process. She practices musical composition and drawing in the same creative impulse, searching for correspondences between the acoustic and the visual, with each discipline influencing the other.

Thanks to her mother, who was passionate about art, Szlavnics was quite young when she came into contact with music, as well as with literature, dance, and the visual arts. Even then, she imagined music as lines and forms in movement. She says drawing “was liberation from my tendency to compose music that sounded like music I already knew.”1 She also states, “My music requires that the listener step forward, come very close in order to see (hear) the details—just as one would, in order to look at the details of the pigment on a painting.”2

Just as her music has been featured in numerous public performances, the visual representations of her musical works have been exhibited in Europe and North America. For curator and art historian Eugene Blume,

Szlavnics’s independent drawings contain no directions that would influence the way we look at them. Seeing is always a silent performance primarily based on sensations. Even so, listening to Szlavnics’s music feels like listening to the sounds of the lines in her drawings. The artist does not necessarily intend these drawings to be compositions or notations that can be translated into sound. Yet as much as she considers her works on paper to be drawings in their own right, they are musical all the same. Conceptual artist Hanne Darboven, having found in her manifold notations a way of expressing the being in time, began to set to music her vast tableaux of characters and symbols. In this regard there appears to be a certain affinity between the two artists.3

Szlavnics was, for a time, co-director of the Ensemble Zwischentöne with Peter Ablinger. She composes for ensembles such as the Ensemble Contrechamps, the Quatuor Bozzini, Ostravská Banda, and Klangforum Wien, and for solo musicians, including Julia Eckhardt, among others. While her music is performed at festivals such as MaerzMusik, Ostrava Days, New Music Concerts, and Darmstadt, the concerts she most prefers are those in intimate settings, off the beaten track, such as in Haus 19 in Berlin, the Wandelweiser Concerts in Haan, the Q-O2 in Brussels, and the Bellelay Abbey.