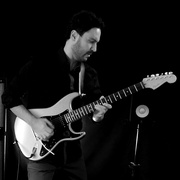 Brazilian composer, guitarist, and performer of electronic music born in 1976.

Aurelio Edler-Copes studied guitar with Daniel Wolff at the Universidade Federal do Rio Grande do Sul–UFRGS, Brazil, and composition with Gabriel Erkoreka at the Centro Superior de Música del País Basco–Musikene in Spain. He then obtained a masters in composition and musical theater from the Hochschule der Künste Bern in Switzerland, where he studied with Georges Aperghis. He then participated in Cursus (the IRCAM’s composition and computer music course), where he studied with Yan Maresz (2009-2010).

Edler-Copes was a composer-in-residence at the Royal Academy of Spain in Rome, the Casa de Velázquez–Académie de France in Madrid, and the KulturKontakt–Federal Chancellery of Austria, in Vienna. He has also worked in residence at IRCAM as well as with GRAME in Lyon, GMEM in Marseille, SCRIME in Bordeaux, and with the Phonos Foundation, the Royaumont Foundation and, in 2017-2018, with the Ensemble Taller Sonoro in Seville, with the support of the Ibermúsicas Residency Program.

Edler-Copes composes for all formations and works regularly with solo performers and ensembles such as the Ensemble Intercontemporain, Klangforum Wien, Musikfabrik (which premiered his Como el aire for seven musicians in 2007), the Diotima Quartet, the Quatuor Béla, Nieuw Ensemble, and Ensemble Itinéraire (which premiered Encore seul(e) for voice and instrumental ensemble in 2012), Mosaik, the Vortex Ensemble, and the Orchestras of Lorraine, São Paulo, Minas Gerais, Bilbao, and Euskadi. He has received some thirty international awards and honors, including the New Forum Jeune Création Prize, the “Premio Roma” of the Spanish Ministry of Foreign Affairs, and the Georges Wildenstein Prize from the French Académie des Beaux Arts.

His artistic explorations focus on merging “electric and acoustic instruments, the creation of new real-time electronics set-ups, and the integration of electronics, video, and light in music composition.”

Aurélio Edler-Copes is co-founder and artistic director of the Krater Ensemble in Spain’s Basque region. He also performs as a guitarist and electronic music artist and forms one half of the duo Bazar Électrique, with harpist and vocalist Eloïse Labaume.