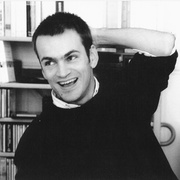 French composer and teacher born in 1971 in La Rochelle.

He went on to study composition at the Conservatoire de Nanterre with Philippe Leroux from 1996 to 2003, then entered the Conservatoire de Paris (CNSP), where he studied with Michaël Lévinas (analysis), Paul Mefano Marco Stroppa (composition), Luis Naón Marc-André Dalbavie (orchestration), Gilles Léothaud (ethnomusicology), and Yann Geslin, Luis Naón, Laurent Cuniot and Tom Mays (electroacoustics). He graduated with highest honors in 2002, unanimously attributed by the jury for composition. He then participated in Cursus (the IRCAM’s composition and computer music course) in 2003-2004. That same year, he was invited to the Siren festival of the University of Göteborg (Sweden), the SYLF Foundation, and to complete a residency with the Meyer Foundation.

As an ethnomusicologist, he has conducted research on the Kam people of Guangxi (China), particularly their use of voice and mouth organ, as well as on Malian folktales and the Mayan calendar, which inspired his Cœur (2003) and Soleils Mayas (2004).

For many years he taught music culture, analysis, music theory, and orchestration at the Conservatoire du Havre and choral singing in Paris. Since 2004, he has taught high school and in the musicology department of the University of French Guiana, Cayenne, and conducts the Petit chœur polyphonique d’Amazonie, for which he wrote a pedagogical opera in 2010 titled Opéra Amazonia.