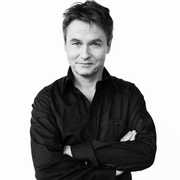 Esa-Pekka Salonen studied horn, conducting, and composition, notably with Einojuhani Rautavaara, at the Sibelius Academy. He debuted as a conductor in 1979, leading the Radio Finland Symphony Orchestra, for whom he went on to serve as director from 1985 to 1995. In 1995 and 1996, he was director of the Helsinki Festival, and from 1992 to 2009 was director of the Los Angeles Philharmonic, being named Laureate Conductor in April 2009. In 1996, the orchestra commissioned LA Variations, which has since become one of the most popular orchestral works composed in recent decades. Salonen is the artistic director of the Baltic Sea Festival, which he co-founded in 2003. In September 2008, he became head conductor of the London Philharmonia Orchestra. He was in residence at the Dortmund Konzerthaus for the 2010-11 season, and in 2011, was guest of honour at the Radio France Présences Festival, during which he conducted the premiere of his work for orchestra, Nyx.

Esa-Pekka Salonen has received numerous prestigious awards for his work as a conductor, including the Accademia Chigiana de Sienna Prize (1993) and the Opera and Conductor Awards from the Royal Philharmonic Society (1995 and 1997, respectively). In 1998, the French government named him an Officer of the Order of Arts and Letters. In 2003, he received an honorary doctorate from the Sibelius Academy, and in 2005 the Helsinki Medal. Musical America named him “Musician of the Year” in 2006. In 2009, he was awarded a second honorary doctorate, this time from the Hong Kong Academy of Performing Arts, and in April 2010, was made an honorary member of the American Academy of Arts and Sciences.

Salonen’s first major work for orchestra, Concerto for Saxophone and Orchestra (…auf den ersten Blick und ohne zu wissen…), dates from 1980-1981, while the composer was still a student of Niccolo Castiglioni and Franco Donatoni. The title was taken from Kafka’s The Trial, which, in Salonen’s mind, expresses the imaginary world which he sought to create in the work. Giro, his second work for orchestra, was also written around this time and exhibits similar harmonic content. Salonen would not compose further large-scale works until some ten years later. He spent the first half of 1982 in the studios of the Finnish Broadcasting Company, working on the radiophonic piece Baalal, which was included in the Prix Italia. Around this time, he started work on a series of solo pieces collectively entitled Yta (“Surface”), comprising Yta I for alto flute (1982), Yta II for piano (1985), and Yta III for cello (1986). The latter work is characterised by its sonorous surface, built upon dense harmonies, which undergoes continuous transformation. This series was complemented with the two-part “Meetings” for two duos of virtuosic insturments: Meeting (1982), for clarinet and harpsichord, and Second meeting (1992) for oboe and piano, a work which served as the basis of Mimo II for oboe and chamber orchestra.

Floof (Songs of a Homeostatic Homer), an experimental piece from 1982 which underwent substantial revisions in 1990, and which was awarded the UNESCO Rostrum Prize in 1992, arguably represents one of Salonen’s most important works from this period. Using texts from Polish science-fiction writer Stanislaw Lem, it is an exuberant and theatricaltour de forcefor soprano and chamber ensemble. Subsequent works of note include*LA Variations(1996) andGambit(1998), both for orchestra (the latter was dedicated to Magnus Lindberg), followed byFive Images after Sappho* (1999) for soprano and ensemble, commissioned by the Ojai Festival in California and the London Sinfonietta.

Following the orchestral works of the 1990s, and while continuing to honour commissions from major orchestras (giving rise to Foreign Bodies [2001]; Insomnia [2002], a co-commission of Suntory Hall in Tokyo and the Norddeutscher Rundfunk in Hamburg]; Wing on Wing [2004], (premiered at the Walt Disney Concert Hall); and Helix [2005]), in the 2000s, Salonen once again produced a number of works for solo instruments, including Concert Etude for horn and Dichotomy for piano (both from 2000), Lachen verlernt for violin (2002) and Invenzione and chorale for piano (2004), as well as chamber works such as Memoria for wind quintet (2003) and Homunculus for string quartet (2008). In the same decade, he composed three concertos for eminent soloists: Mania (2000), for cellist Anssi Karttunen; Piano Concerto for Yefim Bronfman (2007); and Violin Concerto (2008-2009) for Leila Josefowicz.

His first choral work, Two Songs, a setting of poems by Ann Jäderlund, was composed in 2000. Ten years later, Dona nobis pacem, for children’s choir, was premiered at the Présences Festival in 2011.