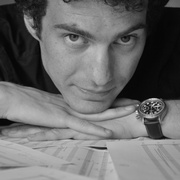 Italian composer born in Rome in 1984.

Vittorio Montalti earned Master’s degrees in composition (with Alessandro Solbiati) from the G. Verdi Conservatory and piano performance (with Aldo Tramma) from the Santa Cecilia Conservatory. He went on to study composition with Ivan Fedele at the latter institution. From 2011 to 2013, he participated in the two years of the IRCAM Cursus (IRCAM’s composition and computer music course), and attended masterclasses with Luca Francesconi, Azio Corghi, Luis De Pablo, and Toshio Hosokawa. He also studied with Frédéric Durieux at the Paris Conservatoire (CNSMDP) during an Erasmus exchange.

In 2010, he was awarded the Silver Lion at the Venice Biennale. Other accolades include second prize in the Milan Conservatory International Composition Competition, a prize from the Galleria d’Arte Moderna in Milan and third prize in the E. Carella Val Tidone International Music Competition. He was selected as a Premio San Fedele Giovani Artisti (2010-2013), and participated in the Sixth Ensemble Aleph Young Composers’ Forum in 2009.

His music has been performed at the Théâtre Dunois, Slowind Festival, the Maison de la Télévision in Strasbourg, Zentral und Landesbibliothek (both in Berlin), Imaginaire (the Italian Cultural Institute in Strasbourg), and the Italian Culture Institutes of Melbourne, Sydney, and Paris. His works have been broadcast on RadioTre Rai et Radio Vaticana.

In June 2013, Tentative d’épuisement, for ensemble and electronics, was premiered at ManiFeste by soloists from the Lucerne Academy Orchestra, conducted by Heinz Holliger.