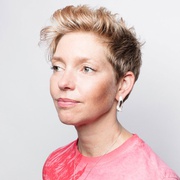 Tansy Davies was born in Great Britain in 1973. She studied composition with Alan Bullard at the Colchester Institute — which also awarded her an honorary doctorate 2011. In 1996, she was a BBC Young Composer and went to study with Simon Bainbridge at the Guildhall School of Music and Drama in London, and Simon Holt at Royal Holloway.

With the support of the Composers Ensemble and the London Sinfonietta, one of her first compositions, The Void in this Colour, was premiered in 2002, a commission from the Spitalfields Festival for the Brunel Ensemble.

In 2009 she received a Paul Hamlyn Award. In 2010, As with Voices and with Tears, a requiem for choir, string orchestra and electronics, was performed to commemorate soldiers who faught for the United Kingdom and the Commonwealth in the two World Wars on Remembrance Sunday in Portsmouth Cathedral. In 2011, Tansy Davies collaborated with choreographer Ingun Bjørnsgaard on Omega and the Deer, a dance projet that toured Oslo, Berlin, Postdam, Hamburg, and New York City. In 2015, her opera Between Worlds, written with the librettist and poet Nick Drake, premiered in a performance by the English National Opera at the Barbican Theater in London. She collaborated with Drake again in 2018 on the chamber opera Cave.

Davies’ work is often inspired by visual or spatial experiences. The structure of Spiral House (2004) parallels the buildings of architect Zaha Hadid, and the work of Anselm Kiefer served as inspiration for Falling Angel (2007), written for Thomas Adès and the BCMG and first performed in Birmingham and at the Festival Présences in Paris.

In 2018-2019, Davies was composer-in-residence at the Concertgebouw in Amsterdam, where she taught workshops for young composers and worked on a piece titled Soul Canoe for the Ensemble Asko | Schönberg, which premiered in May 2019.

She is an associate professor of composition at the Royal Academy of Music in London.

Her work is published by Faber Music.