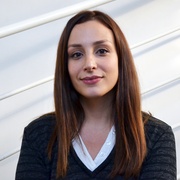 Sofia Avramidou was born in Thessaloniki, Greece, in 1988. She studied piano, harmony, counterpoint, and fugue at the Thessaloniki Conservatory before entering the Aristotle University of Thessaloniki, where she studied between 2010 and 2014 under Christos Samaras, receiving a bachelors and a masters degree in composition with highest honors. She went on to study composition with Ivan Fedele in a specialized masters program at the Accademia Nazionale di Santa Cecilia in Rome, from which she graduated summa cum laude.
In 2017, she studied electroacoustic composition with Jean-Luc Hervé and Yan Maresz at the Boulogne-Billancourt Conservatory.
In 2019-2020, she participated in Cursus (IRCAM’s composition and computer music course). Her final piece, Keep digging the hare hole for cello and electronics, was performed in the main auditorium of the Georges Pompidou Center for the online edition of the Festival ManiFeste.

Sofia Avramidou has won numerous awards, including the Prix Goffredo Petrassi, first prize in the 9th Francisco Escudero International Accordion Composition Competition for VoCx, as well as first prize in the 6th Dimitris Dragatakis Composition Competition for Skin, awarded by the Greek Composers Union. She was also awarded a merit scholarship from the Alexander S. Onassis Foundation.

Throughout her career, Avramidou has participated in numerous composition masterclasses and workshops with composers including Beat Furrer, Philipe Manoury, Georges Aperghis, Francesco Filidei, and Dmitri Kourlandski.
She has received commissions from and invitations to collaborate with many celebrated ensembles, including Ensemble Musikfabrik, Ensemble Intercontemporain, Ensemble Multilatérale, Eva Reiter and Ensemble Ictus, Ensemble Ex Novo, and Ensemble Oktopus. In 2018, she was selected by the Venice Biennale to compose a chamber opera to be performed at the Teatro Piccolo Arsenale.

Avramidou’s work is anchored in the tradition of spectral music. Her compositions focus on timbre, formal evolution, and flux, as well as on developing dramatic narrative through contrast. She approaches sound as a sensitive medium and seeks out new textures and tones.

Sofia Avramidou is also a singer. She has collaborated with numerous ensembles and artists such as Elias Liougos, Dulce Pontes, George Stavrianos, Orpheus Peridis, Manolis Rasoulis, Milva, the Thessaloniki City Symphony Orchestra, and the Plucked String Orchestra of the Municipality of Patras, among others.

She also composes film scores; notably, that of Obscuro Barroco, directed by Evangelia Kranioti, which won the Teddy Award at the Berlin International Film Festival in 2018.

Since May 2021, her work has been published by BabelScores.