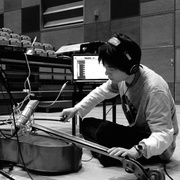 Siting Jiang was born in 1987 in the Hunan Province of China and studied composition and computer music at the Shanghai conservatory, graduating in 2009. He studied for an additional three years at the Kunitachi College of Music in Tokyo, with Shintaro Imai, Takayuki Rai, Keiichi Morigaki, Jacopo Baboni Schilingi, Cort Lippe, and Cathy Cox, and then in 2014 enrolled in a doctoral program in the musical arts. In 2016-2017, he participated in Cursus (IRCAM’s composition and computer music course), under the supervision of Hèctor Parra.

Siting Jiang’s work undertakes to reflect on the aesthetics of musical time and to create new musical concepts to measure and organize sound events. For example, Au départ (2017), for viola and electronics, written as his composition for Cursus, had a musical structure defined around three units of time that compose bodily life: heartbeat, breathing, and organ movement. He has also experimented with integrating concepts from psychoacoustics into electronic music composition. In 2013, Equal-G for flute and electronics won the prize of the International Electronic Music Week of the Shanghai Conservatory of Music.