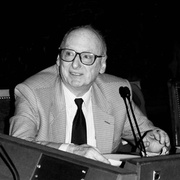 Following studies with Ginette Martenot, Serge Nigg enrolled at the Paris Conservatoire in 1941, where he studied music theory with Olivier Messiaen, and later, counterpoint with Simone Plé-Caussade.

Starting in 1943, some of his early works (mostly unpublished) were performed publicly, including the Concerto for Piano and Wind Instruments, Concerto for Piano and String Orchestra (in the “Les Concerts de la Pléiade” series at the Théâtre des Champs-Elysées, with the National Orchestra; 1947), and the First Piano Sonata. In 1944, when he was just 19 years old, his first orchestral work, the tone poem Timour, was performed by the National Orchestra, conducted by Roger Désormière.

In 1945, Serge Nigg met René Leibowitz, who introduced him to twelve-tone technique. In 1946, he wrote what is widely considered to be the first completely serial work composed in France, the Variations for Piano and Ten Instruments. The work was premiered at the First International Festival of Dodecaphonic Music in Paris in 1947 (organised by Leibowitz), with the composer himself performing the solo piano part. Subsequent works of note include the Quatre mélodies sur des poèmes de Paul Éluard (1948), the ballet Billard, commissioned by the Holland Festival and premiered at the Amsterdam Opera in 1950, and the tone poem Pour un poète captif, premiered in the Prague May Festival in 1951.

Serge Nigg’s career may be divided into several phases. Following the serial period, he became a fierce opponent of the technique in 1950. This dramatic shift in style is reflected in the series of concertos from the 1950s comprising the First Piano Concerto (1954), the Violin Concerto, premiered at the Théâtre des Champs-Elysées in 1960 and subsequently widely performed by Christian Ferras (to whom it was dedicated), and the Concerto for Flute and String Orchestra, premiered in 1960. In the early 1960s, he returned to dodecaphonism, albeit with a more balanced, far less systematic application of the technique, giving rise to what are generally regarded as his first “mature” works, e.g., the Jérôme Bosch-Symphony, inspired by the Dutch painter’s famous triptych The Garden of Earthly Delights and premiered at the Strasbourg Festival in 1960. In 1961, Histoire d’œuf, a musical tale based on the Anthologie Nègre by Blaise Cendrars, was premiered by the newly-formed Percussions de Strasbourg; the work was subsequently translated into several different languages and performed in numerous countries. Le chant du dépossédé (1961), a commission of the Strasbourg Festival for baritone, speaker and orchestra, was loosely based on Stéphane Mallarmé’s “poetic notes” (published under the title “For Anatole’s Tomb” [“Pour un Tombeau d’Anatole”]). Visages d’Axël, a two-part work for orchestra, was premiered in 1967 and later widely performed internationally; a recording of it was awarded the “Grand Prix du Disque” by both the Charles Cros Academy and the French Académie du Disque. Fulgur, commissioned by the French Ministry of Culture and inspired by Antonin Artaud’s novelised biography Héliogabale ou l’anarchiste couronné, was premiered in Paris by the Radio France Philharmonic, with Charles Bruck conducting.

Several concertos and orchestral works followed: Second Piano Concerto (1971); Fastes de l’imaginaire (1974); Mirrors for William Blake; Symphony with Piano (1979); Million d’oiseaux d’or (1981), with a title borrowed from Arthur Rimbaud, commissioned by Michel Plasson, and premiered at Symphony Hall in Boston; and Poem for Orchestra, commissioned by the Community of Francophone Public Radio Stations and premiered in Quebec in 1990.

Nigg composed many chamber works for international competitions for performers, including Arioso (1987) for violin and piano and Tumultes (1998) for solo piano, both for the Marguerite Long-Jacques Thibaud International Competition, and Viola Concerto (1988) for the Reims International Performers’ Competition. Other notable pieces include the Piano Sonata No. 3 (1984), Deux images de nuit (1999), and the Sonata for Piano and Violin (1994), commissioned by Radio France. Nigg has also made arrangements of French folk songs for voice and choir. His cycle for soprano and chamber orchestra, Du clair au sombre (1987) is another setting of poems by Paul Éluard. A recording by the Enesco Quartet of his String Quartet (1982) was awarded the “Grand Prix du Disque” from the French Académie du Disque in 1989.

In addition to his achievements as a composer, Nigg made major contributions to the contemporary musical culture in France and was active as a teacher. In 1956, he became a member of the Music Committee of French Radio. In 1967, he became the Director of the same committee, and was invited by Marcel Landowski to assume the management of the French National Opera Houses, a position he would retain until 1982, when he became a professor of instrumentation/orchestration at the Paris Conservatoire (CNSMDP). Also in 1982, he was named President of the National Society of Music, an organisation founded in 1871 by Camille Saint-Saëns which has played a significant, historic role in expanding French repertoire. Elected a member of the French Academy of Fine Arts in 1989, he went on to become President of the organisation in 1995.