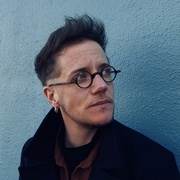 At the IRCAM, they worked with MuTant on Antescofo, a program designed to aid with the synchronization of electronics in live performances, studying the new possibilities it implied for composing and electronics. They received their doctorate in musical composition in 2017, studying in a joint Ircam-Sorbonne-CNRS program and working with the IRCAM’s Représentations Musicales team.

Blondeau composes mixed intrumental and electroacoustic music, and is particularly interested in the interactions between instrumental and electroacoustic composing “in the same space of expressivity,” describing their work on compositional space as an attempt “to give a theoretical and musical framework to the organization of matter and its links to temporal and formal questions.” In this way, they seek to “work on ideas of distance, kinship, continuity/discontinuity within musical entities of different scales forming a set of compositional landscapes.”

Blondeau was a resident at the Cité Internationale des Arts in Paris from July 2013 to June 2015. In 2014, they were selected to participate in the IRCAM’s ManiFest Academy for an Atelier In Vivo on musical theater (Nachleben), as well as in Harvard University’s Summer Composition Institute (État d’exception). They were also a fellow of the Villa Médicis in Rome in 2018-2019 and a resident in 2021-2022. They were awarded the SACEM “Claude Arrieu” Prize in 2018.

In 2022, Sasha J. Blondeau will collaborate with François Chaignaud and Hélène Giannecchini, all three in residence at Royaumont and Villa San Francisco, a project in which Ircam and the Orchestre de Paris are associated. In 2022-2023, the composer will be fellow at Villa Concordia, Germany.

Their work has been performed by Christophe Desjardins, Donatienne Michel-Dansac, Lionel Peintre, Richard Dubelski, and Séverine Ballon, as well as by ensembles such as the Atelier XX-21 and Talea.

Blondeau has received commissions from the Festival Musica (Tesla ou l’effet d’étrangeté), Percussions de Strasbourg (Théâtre d’ombres), the GMEM in Marseille (Sortir du noir), and Françoise and Jean-Philippe Billarant for Namenlosen. The latter piece for four soloists, ensemble, and electronics, premiered in July 2017, performed by Ensemble Intercontemporain at the Philharmonie de Paris during the ManiFeste festival.