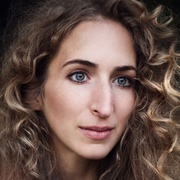 Sarah Nemtsov played flute from age 9 to 13 in concerts and recordings with Reil Trio (two flutes and harpsichord). At the age of 14, she took up the oboe. She went on to study composition in Hannover with Nigel Osborne and Johannes Schöllhorn, and, starting in 2005, in Berlin with Walter Zimmermann. An oboist and occasional performer of her own works, she has focused exclusively on composition since 2007.

In 2014-2015, she was composer-in-residence with the Erfurt Philharmonic Orchestra, during which her orchestral works were performed in three concerts. In 2014, she taught composition and theatrical music at the Cologne Musikhochschule, and in 2018, was a guest professor of composition at the University of Haifa in Israel.

Recently, she has become particularly interested in musical stratification and “constructive chaos” as a means of expressing reality, as well as in interactions between acoustic instruments and electronics. Literature is a prime source of inspiration for many of her works. The poetry of Emily Dickinson inspired several pieces: leer - empty (2011), startled grass (2010), Moon at noon (2009), How slow (2008), and Not knowing (2007). L’Absence (2008) is based on Edmond Jabès’ The Book of Questions, and Träne (2016) is a setting of a poem by Paul Celan.

In 2015, Sarah Nemtsov, along with her husband, pianist Jascha Nemtsov, founded the Raum für Kunst und Diskurs, a gallery/performance space in Berlin. She also initiated and served as composer/artistic director for the “Mekomot” project, comprising a series of performances of contemporary music and ancient Jewish liturgical chants in abandoned synagogues in Germany and Poland.

Several of her works are published by Peer Music Classical (Hamburg), and, since 2016, by Ricordi. The Wergo label has released two CDs dedicated to her music: A LONG WAY AWAY (2012) and amplified imagination (2018). In 2021, she was elected as a member to the Saxon Academy of Arts as well as to the Berlin Academy of Arts.