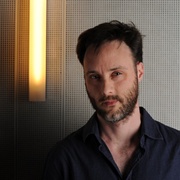 Roque Rivas studied jazz guitar and piano in Santiago, Chili, before pursuing study of music theory at the National Conservatory of the same city. In 2001, he undertook study of electroacoustic composition and computer music at the Paris Conservatoire (CNSMDP). In 2004, he participated in Centre Acanthes, allowing him further study with Jonathan Harvey and Philippe Manoury. In 2005, he started an advanced composition degree under the direction of Emmanuel Nunes, again at the Paris Conservatoire. In the same year, he was awarded the Francis and Mica Salabert Prize from the composition department of the Lyon Conservatory. From 2006 to 2008, he participated in the two years of the IRCAM Cursus (IRCAM’s composition and computer music course), culminating in the premiere of Mutations of matter, a collaboration with video artist Carlos Franklin for five voices, electronics, and video, in June 2008 at the Agora Festival. This piece was awarded first prize at the 2009 Bourges International Electroacoustic Music Competition in the category “Electroacoustic Music and Electronic Arts.”

Commissioned by IRCAM, About cages was premiered in March 2010 in Porto by Remix Ensemble, conducted by Peter Rundel. Ondulaciones for chamber ensemble and electronics, was commissioned by, and premiered at, the Why note Festival in Dijon in 2011. In the same year, Rivas participated in the Opéra en Création workshop at the Aix-en-Provence Festival, under the direction of composer and conductor Peter Eötvös. In 2012, Assemblage, a concerto for piano, chamber ensemble, and electronics, was premiered at ManiFeste. This piece was awarded the Giga-Hertz Preis für Elektronische Musik from the ZKM and the SWR ExperimentalStudio. In 2014, Rivas collaborated with choreographer Shang-Chi Sun to create Threads, a commission of GRAME and the Taipei Digital Arts Center, which was premiered at the Digital Art Festival of the same city. In 2019, Campo abierto for large ensemble and electronics was premiered by Ensemble Intercontemporain.

He regularly gives masterclasses in Europe, Asia, and Latin America, as well as at IRCAM, where, as part of his composition research residency, he contributed to the development of the OMChroma library, a set of tools which provide a high-level control over sound synthesis.