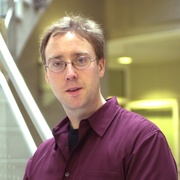 Robin de Raaff was born on 5 December 1968 in Breda, the Netherlands. He began his musical studies in piano, fretless bass guitar, and jazz. He began composing pop music, but his instrumental writing slowly attained symphonic dimensions. He decided to enroll in the Sweelinck Conservatory of Amsterdam, where he studied composition with Geert van Keulen and Theo Loevendie. In 1995, he took a master class with Pierre Boulez organized by the Dutch National Opera, which would have a decisive impact on his career. He graduated cum laude from the Conservatory in 1997. In 1999 he was invited to be George Benjamin‘s only composition student at London’s Royal College of Music, where he also studied with Julian Anderson.

Today, De Raaff coordinates the department of composition at Codarts (the Rotterdam Conservatory of Music), where he began teaching composition and orchestration in 2001.

From 1996-1997, his Double concerto for clarinet, bass clarinet, and orchestra brought him his first renown: it was the jury selection for the Gaudeamus Prize and won the Bernhard van den Sigtenhorst Meyer Prize in 1998. Anachronie for flute and harpsichord won first prize in the International Competition for Composers of Chamber Music in Winterthur (Switzerland) in 1997. Commissioned by the Gergiev Festival in 1998, Der Einsame im Herbst premiered in a performance by Henk Guittart (a member of the Schönberg Quartet) and the Doelen Ensemble. After this first performance, the piece was performed many times, including at Lincoln Center’s Alice Tully Hall in a performance by the New Juilliard Ensemble.

De Raaf was invited to Tanglewood Music Center in 2000, where his septet Ennea’s domein was performed. Numerous commissions and residencies followed. Ennea’s Domein was performed by the London Sinfonietta in Queen Elizabeth Hall. The Tanglewood Music Center commissioned a Piano concerto to be premiered at the Tanglewood Festival of Contemporary Music in 2001 in a performance by Ralph van Raat, conducted by Ludovic Morlot. Performances of the piece followed in Frankfurt, Utrecht, Amsterdam, Rome, and London. In 2007, the Boston Symphony Orchestra commissioned Entangled tales. The quartet Un visage d’emprunt premiered at the Tanglewood Festival in 2009.

The opera RAAFF, on the life of Anton Raaff, the tenor for whom Mozart wrote the title role of Idomeneo, was commissioned by the Dutch National Opera in coproduction with the Holland Festival and premiered in 2004 in a performance by the Nieuw Ensemble. De Raaff developed a special link with the Concertgebouw of Amsterdam, which also premiered his Concerto for orchestra in their 2002-2003 seaosn, conducted by George Benjamin. The Concertgebouw also commissioned Unisono, whose premiere in Amsterdam was conducted by Ed Spanjaard in 2004; the orchestra then recorded a monographic album on the Etcetera label featuring his orchestral works and his Concerto pour piano.

In 2001, De Raaff collaborated with the Ictus ensemble, its director Georges-Elie Octors, Thierry De Mey, and the ROSAS dance company, directed by Anne Teresa De Keersmaeker, on a multimedia project titled Counter Phrases. In 2008, De Raaff composed the musical score for Megumi, a dramatic documentary by Mirjam van Veelen, which he dedicated to saxophonist William Raaijman (1972-2007). The documentary was shown in numerous international film festivals.

In 2008, his Violin concerto, another commission from the Concertgebouw of Amsterdam, premiered with Tasmin Little to wide praise by the national press, and was named best composition for the orchestra for the year 2008 in the Toonzetters Competition.

In June 2012, the Dutch National Opera premiered his second opera, Waiting for Miss Monroe, with a libretto by Janine Brogt.