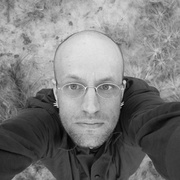 Robert Henke was born in Germany in 1969. An engineer by training, he designs and operates machines that generates sounds, shapes, and structures. Developing his own instruments and algorithms is an integral part of his creative process.

He works with computer-generated sounds and images, sound fields, photographs, and light, which are transformed, rearranged, and modulated according to mathematical rules, real-time interaction, and controlled random operations. He applies particular focus on the exploration of both virtual and physical spaces. Many of his works use multiple audio channels or are designed for specific venues and their spatial specificities.

His music is located at the border between club music, sound and audiovisual installations, computer-assisted contemporary composing, and software publishing. His long-term musical project, Monolake, launched in 1995 with Gerhard Behles, became one of the key icons of a new electronic club culture emerging in Berlin after the fall of the Wall. Henke produces most of his work under the name Monolake, with Behles until 2001, and now as a solo artist (with support from Berlin-based artists such as T++ and Rashad Becker).

Henke is also one of the main creators of Ableton Live, a software which since its invention in 1999 has become a standard tool for the production and practice of electronic music. His compositions include software and modules for Ableton Live that he developed himself, such as Granulator II, MicroDrum, ConVoyage, Density, and FDN4. He also uses both analog and digital synthesizers, as well as ambient sound recordings. His work sometimes takes place over several phases, in multiple versions that he augments, reduces, rearranges, or remasters. His knowledge of acoustic engineering allows him to polish each step in the production of his recorded works. Mastering thus has a key place the process he uses to create his musical works, as he explains in an article about his approach to this technique.

He writes and lectures about sound and the creative use of computers, and held teaching positions at the Berlin University of the Arts, the Center for Computer Research in Music and Acoustics (CCRMA) at Stanford University, and the Studio National des Arts Contemporains - Le Fresnoy, in Lille, France. His installations, performances, and concerts have been held at the Tate Modern in London, the Pompidou Center in Paris, Le Lieu Unique in Nantes, PS-1 in New York City, the MUDAM in Luxembourg, the MAK in Vienne, the Art Gallery of New South Wales in Australia, and many festivals.

In 2018, he was a guest of IRCAM’s ManiFeste festival for the premiere of his piece From Within… in collaboration with the composer Marko Nikodijevic.