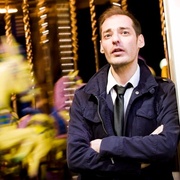 French composer born in 1968 in Marseille.

Born in France in 1968, Régis Campo studied music theory and composition with Georges Boeuf at the Conservatoire de Marseille, his hometown, as well as philosophy at the Université d’Aix-en-Provence. Campo then continued his studies at the Conservatoire national supérieur de musique de Paris with Gérard Grisey, graduating with highest honors in composition in 1995. In Paris, he met major independent composers such as Edison Denisov and Henri Dutilleux.

Campo’s music has often been described as playful, humorous, and colorful. His catalogue, which features more than one hundred works - concert, opera, film - covers a diverse array of instrumental and vocal formations. His pieces have premiered in Europe and in some thirty countries across the globe, with some of the world’s greatest performers.

In 1996, Campo received the Gaudeamus Prize for Commedia. That same year, his brass quintet Exsultate jubilate received three prizes at the Henri Dutilleux Competition. In 1999, he was awarded the Prix Hervé Dugardin by the SACEM and the Prix Pierre Cardin by the Académie des Beaux-Arts. From 1999 to 2001, he was a resident at the Villa Médicis in Rome.

Lumen for orchestra was performed by the Berkeley Symphony Orchestra, conducted by Kent Nagano, in September 2001. Première Symphonie also premiered in Berkeley, California, commissioned in April 2003 by the same performers. In November 2003, Dame Felicity Lott premiered Happy Birthday for soprano and orchestra at the Théâtre des Champs Elysées with the Ensemble Orchestral de Paris, conducted by John Nelson.

He was awarded the SACEM Young Composers Prize and the Prix Georges Bizet of the Institut de France in 2005. That same year, the Ysaÿe Quartet premiered his first string quartet, Les Heures maléfiques, at the Beethovenfest in Bonn. His album “Pop-art,” released on the æon label, won a Coup de cœur-Charles Cros and the Teachers’ Prize of the Grand prix Lycéen composers competition in 2006. His Deuxième Symphonie”Moz’art” premiered in September 2005 in a performance by the Ensemble Orchestral de Paris, conducted by John Nelson, at the opening of the 2005-2006 season of the Théâtre des Champs-Élysées.

The year 2008 marked the premiere of a song cycle for soprano and orchestra titled Le Bestiaire, based on the poems of Apollinaire, which was composed for Felicity Lott and the Orchestre National de France and co-commissioned by Radio France and Musique Nouvelle en liberté for the Festival Présence and the festival Les Paris de la Musique. That same year, on 20 February, the Orchestre Symphonique de Montréal, conducted by Kent Nagano, premiered Campo’s orchestration of Sports et Divertissements by Erik Satie.

A first lyric work, Les Quatre Jumelles, an opéra bouffe based on a play by Copi for four vocalists and nine instruments, premiered in 2009 at the Maison de la Musique in Nanterre and was performed at many other venues, including the Théâtre Sylvia Monfort in Paris, the Scène Nationale de Mâcon, the Grand Théâtre of Reims, the Opéra de Massy, and the Phénix National Theater in Valenciennes. His second opera, Quai ouest, based on a play by Bernard-Marie Koltès, premiered in September 2014 at the Opéra National du Rhin during the Festival Musica, and then was performed again in a German version for the 2014-2015 season at the Nuremberg Staatstheater.

Campo was a guest composer at the Festival d’Auvers-sur-Oise in 2009, at which his Éden for violin was premiered in a performance by Laurent Korcia, as well as Hommage à Georges Cziffra for piano, performed by Zoltán Kocsis.

In 2018, the Ars Musica Festival commissioned two pieces, Dancefloor With Pulsing for theremin and orchestra and Un Omaggio affettuoso ed eccentrico al Maestro Morricone for orchestra, both of which premiered with the Brussels Philharmonic Orchestra and the Orchestre Royal de Liège.

In May 2017, Campo was elected to the musical composers’ section of the Académie des Beaux-Arts.