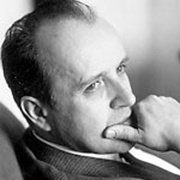 Born on 3 December 1911, in Milan, Nino Rota was a child prodigy, composing the oratorio L’infanzia di San Giovanni Battista at the age of 11. He came from a deeply musical family: his maternal grandfather, Giovanni Rinaldo, was an esteemed pianist and composer, while his mother, Ernesta, abandoned a promising career as a pianist to raise her family and oversee the progress of her son’s budding talent. Nino’s childhood home was one of the most important musical salons in Milan; regular visits from the preeminent composers of the day contributed to development of the young Nino. Indeed, the composer maintained an entourage of illustrious artists, writers, and composers (Toscanini, Menotti, Barber, D’Annunzio, Savinio, etc.) throughout his adult life. Having grown up in a somewhat anachronistic atmosphere, Rota would retain a nostalgic attachment to the idea of the salon bourgeois, and was a regular visitor at Cecchi’s salon during his time in Rome. Perhaps as a consequence, he developed a propensity to make use of popular song, dances, fanfares, and circus and vernacular music in his works.

Rota studied with Alessandro Perlasca before enrolling at the Milan Conservatory, initially studying with Giacomo Orefice, and later with Paolo Delachi and Giulio Bas. He also attended lessons with the Italian masters, including Ildebrando Pizzetti, who took exception to the hype surrounding the young composer, and (more significantly) Alfredo Casella, whose guidance and progressive, farsighted outlook would prove to be formative, not just in Rota’s development as a composer, but in his character as well. Under Casella’s tutelage, in 1930, Rota graduated (at just 18 years of age) with a degree in composition from the Accademia di Santa Cecilia. Subsequently, with support from Arturo Toscanini, Rota was awarded a grant to attend the Curtis Institute in Philadelphia, where he, along with fellow classmates Menotti and Barber, undertook further study with Rosario Scalero, Fritz Reiner, and Johann Beck, and became personally acquainted with Copland. Upon his return to Milan, he enrolled in a philosophy degree at Regia Università; his thesis, written under the supervision of Antonio Banfi, was entitled “Technical and Aesthetic Aspects of Italian Renaissance Music through the Prism of the Theories of Gioseffo Zarlino”.

In 1937, Rota was unexpectedly named Chair of Theory and Ear Training at the Tarante Music School. In 1939, he became a professor of theory and counterpoint, and later composition, at the Piccinni Conservatory in Bari, going on to become director of the institution, where Riccardo Muti was among his students. Rota’s position at the conservatory provided optimal conditions for his work as a composer; his works for piano and chamber ensemble were frequently performed by students and colleagues, and he would retain close ties to his Piccinni “family” for the rest of his life. Rota oversaw a major transition in the conservatory and in the musical scene in Bari in general, regularly hosting the leading practitioners of the day as guest professors and actively supporting, sometimes financially, the most talented students.

Around 1940, Rota developed friendships with the Cecchi and D’Amico families. Suso Cecchi would soon gain acclaim as a screenwriter for Italian cinema, and Fedele D’Amico, a prominent musicologist, would become an ardent defender of Rota’s music at a time when it was the object of harsh criticism. Through the efforts of Emilio Cecchi, Artistic Director of the Società Italiana Cines, Rota was commissioned by Raffaello Matarazzo to compose the score for Treno popolare. The film was, however, panned by critics, and Rota would not work in cinema again for several years, focusing his efforts instead on theatrical and concert works. He returned to cinema when Guido M. Gatti offered him a position at Lux Film, a production company for which he would work continuously from 1942 to 1962, with directors including Mario Soldati, Alberto Lattuada, Mario Camerini, Luigi Comencini and, most notably, Federico Fellini. Rota nonetheless continued to compose concert and theatrical works throughout the 1940s (concertos, sonatas, melodramas, and a great deal of vocal music). Thus, at this time Rota sustained a dual career as a composer of concert/theatrical music and of soundtracks for films.

The 1950s saw the creation of Rota’s most well-known work, Il cappello di paglia di Firenze, which critics consider to be the only true Opera Buffa of the 20th century. This was followed by I due timidi, La Notte di un Nevrastenico, L’Imprésario de Smyrne (directed by Luchino Visconi and premiered at La Fenice Opera House in 1957), and Lo scoiattolo in gamba, a fable in one act with a text by Eduardo De Filippo, dedicated to childhood, a theme which was dear to Rota. The composer’s catalogue of symphonic works also grew considerably in this decade, with the composition of the Piano Concerto, dedicated to Arturo Benedetti Michelangeli, and concertos for trombone, cello, and bassoon.

It was during this period that Rota gained widespread acclaim as a composer for cinema. Noteworthy among his numerous film scores (of which he would create roughly one per year) are The Glass Mountain by Henry Cass, War and Peace by King Vidor, Side Street Story by Eduardo De Filippo, This Angry Age by René Clément, and The Great War by Mario Monicelli. Additionally, collaborations with two of the leading figures of Italian cinema at the time, Federico Fellini and Luchino Visconti, on films including Le Cheik blanc, Les Vitelloni, La strada, Les Nuits de Cabiria, and Les Nuits blanches, demonstrated Rota’s quintessential cinematic/musical language. The composer continued to work with these two giants of Italian cinema in the 1960s, resulting in the soundtracks for masterpieces of cinema including La Dolce Vita, 8 1/2, Satyricon, Rocco and his Brothers, and The Leopard. Meanwhile, Rota had also begun to work with Franco Zeffirelli (on The Taming of the Shrew and Romeo and Juliette), and turned his hand to television drama for Lina Wertmüller’s TV miniseries adaptation of Il giornalino di Gian Burrasca by Vamba. A theme composed for this production became one of his most well-known motifs. Rota nonetheless remained active outside of cinema and television, composing the ballet La strada and the oratorio Mysterium Catholicum, as well as a number of other sacred works.

Starting in the 1960s, critics became sharply divided on Rota’s music. The most scathing reviews were directed at his score for Side Street Story, which certain critics felt to be a jumble of heterogeneous musical styles and syntaxes. The public, in contrast, lauded Rota’s work, and choreographer Maurice Béjart sought a collaboration with him for Le Molière imaginaire. In 1975, Rota received an Academy Award for the soundtrack of The Godfather Part II, and gained further, widespread acclaim for his scores for Amarcord, Casanova, and Prova d’orchestra, his final collaborations with Fellini.

The recipient of prestigious prizes in Italy, England, and the United States, Nino Rota died on 10 April 1979 in Rome. Fellini’s moving obituary to his “magical friend,” published in Messaggero, encapsulated the depth of his admiration for the composer. Rota’s strength, he wrote, was his “geometric imagination, his sometimes celestial musical vision” which allowed him to merge music with moving image as no other could. At Fellini’s funeral, in accordance with the wishes of his widow, Giulietta Masina, trombonist Mauro Maur performed Rota’s Improvviso dell’angelo in the Basilique Santa Maria degli Angeli e dei Martiri.