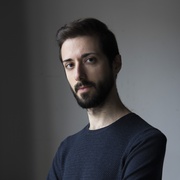 Maurizio Azzan was born in 1987 in Carmagnola, Italy. He studied composition with Alessandro Solbiati at the Conservatory of Milan, as well as with Salvatore Sciarrino. In 2015, he began his masters in composition at the Paris Conservatory (CNSMDP), where he studied composition with Frédéric Durieux and electroacoustic music with Luis Naón, Yann Geslin, Yan Maresz, and Oriol Saladrigues. He has also taken masterclasses with Franck Bedrossian, Pierluigi Billone, Stefano Gervasoni, Francesco Filidei, Joshua Fineberg, Michaël Levinas, and Tristan Murail, among others. He holds a masters in philology and ancient literature from the University of Turin. In 2017-2018, he participated in Cursus (the IRCAM’s composition and computer music course).

His music draws inspiration from his interests in the visual and the performing arts, and in ancient and contemporary literature, nourishing his understanding of music “as a dynamic space-time network, in which instability is the pivotal element of the existential condition.”

He has been a fellow at the Centre International Nadia et Lili Boulanger, and in 2012 he was awarded the Premio Nazionale delle Arti by the Italian Ministry of Education, University and Research. In 2013, he won the Incontri Internazionali Franco Donaton composition competition in Milan, and took part in the Fondation Royaumont’s first PROTOTYPE, a professional training programme in contemporary dance and music for composers and choreographers.

In 2017-2018, Azzan was an artist-in-residence at the Cité Internationale des Arts in Paris, and in 2019 was a composer-in-residence in the residency program organized by the Austrian Federal Chancellery in cooperation with KulturKontakt Austria. In 2021 he is composer in residence at FFF – Fortissimissimo Firenze Festival.