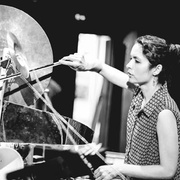 Marisol Jiménez is a composer, performer, and interdisciplinary artist. She obtained a Master of Arts degree from Mills College (California) in 2005 and a Doctorate in composition from Stanford University in 2011. Over the course of her education, she studied with Brian Ferneyhough, Mark Applebaum, Chris Chafe, Erik Ulman and Josh Levine. She is the founder and Artistic Director of the ARTSON Festival of contemporary music, which takes place in her home town of Guadalajara. She was awarded first prize in the 39th International Irino Composition for Chamber Orchestra Competition (Tokyo), and recently became a member of the Sistema Nacional de Creadores de Arte in Mexico.

Her works have been commissioned and programmed by groups such as BIT20, London Sinfonietta, Decoder Ensemble, SLORK (Stanford Laptop Orchestra), OEIN (Orquesta Experimental de Instrumentos Nativos), Surplus, Ensemble Intercontemporain, Ensemble Recherche and Arditti Quartet. Her music has been performed in the USA, Brazil, Japan, and throughout Europe, including at festivals such as Borealis, Heroines of Sound, Ultima, Darmstadt Ferienkursen, SLAM (Seattle), Festival Signal Flow at Mills College, and Ultraschall.

Her catalogue comprises, for the most part, chamber music with electronics, often also making use of visual elements and/or real-time audio treatments. Her works reveal a fascination for the tactile nature of the compositional process, and for the intrusions of entropy in a structured musical “machinery.” In line with her creative objectives, she often produces her own sounds and constructs sonic sculptures using found objects, field recordings and experimental electro-acoustic instruments. For example, her “noise spring harps,” comprising large suspended springs which may be struck or bowed, are required for performances of Mesetas (2010), Songôj Fontoj (2012), Yuariya Vaicári (2016), and Sensuous Matter (2018). For the latter work (a large-scale installation), Jiménez was awarded a grant from the Initiative Neue Musik in Berlin in 2018.

Several of her installations (e.g., Sensuous Matter (2018), Cuicári heciariyá (2017)) have been presented at Spektrum in Berlin, a venue that is focused on presenting works which are deeply connected to technology. Another installation, Rhizomatic Portal (2010), was presented at the SOMArts Cultural Center in San Francisco.