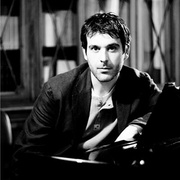 Italian composer born in 1978 in Perugia.

Marco Momi studied piano and chamber music with Antonio Ballista and composition with Fabio Cifariello Ciardi from 2001 to 2006 at the Perugia Conservatory. Starting in 2005, he undertook further study at the Royal Conservatory in The Hague, and the following year, graduated with a degree in composition from the Strasbourg Conservatory where he studied with Ivan Fedele. He participated in the two years of the IRCAM Cursus (IRCAM’s composition and computer music course) in 2007-09, allowing him further study with Yan Maresz, and attended the Darmstadt Summer Courses in 2002, 2006 and 2008. Additionally, he studied conducting with Ennio Nicotra from 1998 to 2004, and obtained a Doctorate from the Santa Cecilia National Academy of Music in Rome, under the supervision of Ivan Fedele.

His works have been performed in festivals including Nuova Consonanza in Rome (2003, 2004), the 14th World Saxophone Congress in Ljubljana, Music Today in Seoul (2005), Gaudeamus (2005, 2006, 2007), Darmstadt Summer Courses and Musica in Strasbourg (2005, 2008), by ensembles such as Nieuw Ensemble, Disecheis Duo, Cronophonie, ASKO, Algoritmo and the Strasbourg Saxophone Quartet.

In 2009, Ludica for percussion and electronics was premiered by Slagwerk Den Haag Ensemble. In the same year, Iconica III was premiered by the Neue Vocalsolisten Stuttgart. More recent projects include Ruine d’image, a collaboration with visual artist Chiara Vecchiarelli and Hic et Nunc Ensemble, and a piece for Nikel Ensemble commissioned by the Ernst von Siemens Foundation. His work for the second year of the IRCAM Cursus, Iconica IV, for string trio, flute, clarinet, prepared piano and electronics, was premiered in June 2010 by Ensemble Intercontemporain at the Cité de la Musique as part of the Agora Festival.

In 2010, Marco Momi was composer-in-residence with the Berlin Academy of the Arts, and in 2012 at the Banna Spinola per l’Arte Foundation. He has taught in conservatories and universities in Italy and South Korea. Currently, he teaches theory and analysis at the Brescia Conservatory and composition at the Sassari Conservatory (both in Italy). His works are published by Nuova Stradivarius (Milan), Suvini Zerboni (Milan) and, since 2015, Ricordi.