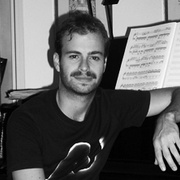 Born in Italy in 1976, Luca Antignani studied piano, composition, orchestral conducting, and electronic music, at the Scuola Civica de Milan, where he studied with Alessandro Solbiati) and then with Azio Corghi at the the Accademia Nazionale di Santa Cecilia in Rome, from which he graduated in 2001. That same year, he took part in Cursus, IRCAM’s composition and computer music course.

In 2002, Antignani was chosen to represent Europe in the International Forum of Young Composers, co-sponsored by the University of Montreal and the Nouvel Ensemble Moderne, which resulted in a commission from the Ensemble. He has also received commissions from Radio France, both for the Festival Présences and a series of pieces for the musical program “Alla Breve.” In 2003, the Mediterranean Youth Orchestra commissioned a piece for choir and orchetra to be performed on their European tour. In 2004, he collaborated with the Ensemble intercontemporain for the Festival Acanthes. In 2005, the Accademia Nazionale di Santa Cecilia and the Venice Biennale commissioned a work for large orchestra from him.

Antignani’s work has been performed around the world and at many different festivals including Settembre Musica, Milano Musica, the Dresden Music Festival, Nuova Musica, and the Festival Musica. Some of his pieces have been recorded and broadcast by RAI (Italy’s national public broadcasting company) and as well as by other radio broadcasting companies outside of Italy.

He is also a musicologist, and contributed articles on contemporary and electronic music to the 2003 edition of the De Agostini Encyclopedia.

From 2007 to 2009, Antignani was composer-in-residence at the Conservatoire d’Annecy, in co-production with the organization Musique Inventive d’Annecy (MIA) and the Conservatoire de Chambéry. In March 2010, a new piece for ensemble and electronics (a commande d’état, or commission, from the French Ministry of Culture) was premiered by the Ensemble Orchestral Contemporain in Lyon (electronics produced in the GRAME studios).