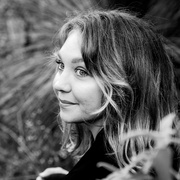 Kirsten Milenko studied International Relations and piano at the University of New South Wales in Sydney, alongside classes of dance and French and English literature, starting in 2012. She went on to study composition with Liza Lim, Natasha Anderson, Ursula Caporali, and Rosalind Page at the Sydney Conservatory, where she was awarded the Ignaz Friedman Memorial Prize for excellence in composition in 2016. In 2017, she undertook a Master’s of Composition at the Royal Danish Academy of Music in Copenhagen, where she studied with Niels Rosing-Schow, Simon Løffler, and Jeppe Just Christensen. She is currently completing a conducting degree under the tutelage of Arturo Tamayo at Conservatorio della Svizzera italiana in Lugano (Switzerland).

In 2020, her first opera/dance/theatre work, Dalloway, was premiered at the Pulsar Festival. In the same year, she participated in Royaumont Voix Nouvelles. In 2021, Milenko was awarded a Roche Young Commission by the Artistic Director of the Lucerne Festival, Wolfgang Rihm. She was also chosen to compose an opera, in collaboration with Bea Redweik (librettist) and Johan Klint Sandberg (stage director), based on Albert Camus’ The Stranger, to be premiered at the National Theatre in Mannheim.

Through her use of vocal forms, instruments, electronics, and corporeal expressivity, Milenko attempts to create a dialogue between sound and movement, and to compose music which explores the interconnections between humanity and our environment.

Currently in residence at the Cité Internationale de Arts in Paris, Kirsten Milenko divides her time between Paris and Copenhagen. She is a represented artist at the Australian Music Centre.