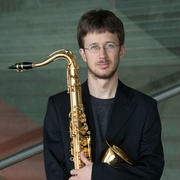 Kevin Juillerat was born in Switzerland in 1987. He studied saxophone with Pierre Stéphane Meugé at the Haute École de Musique de Lausanne, and with Marcus Weiss at the Basel Hochschule für Musik. He earned two masters degrees, one in music teaching and the other in contemporary music. In addition to his instrumental studies, he took composition courses with Michael Jarrell and Luis Naón at the Geneva University of Music and with Georg Friedrich Haas in Basel. In 2015-2016, he participated in Cursus (IRCAM’s composition and computer music course). Juillerat now teaches music theory at the École Sociale de Musique de Lausanne and regularly gives courses in saxophone, composition, improvisation, and contemporary music performance.

In 2015, he won 3rd prize at the 5-Minute Opera Competition in Zagreb, and in 2013, he was a finalist in the second Maricio Kagel Composition in Vienna.

Juillerat has composed for, among others, the Orchestre de Chambre de Genève, the Linea and Proxima Centauri ensembles, Phoenix, Vortex, soyuz21, Batida, Duo AKMI, and the Eunoia Quintett, as well as for pianist Cédric Pescia, flutist Antonio Politano, trombonist Mike Svoboda, and conductor Arie van Beek. His pieces have been performed in Europe, Russia, Australia, and South America, in festivals such as Label Suisse, Rümlingen, Mixtur, Remusik, Musik Biennale Zagreb, Impuls Festival, and the International Saxophone Congress and Festival.

His taut, expressive music contains many musical, literary, and visual influences. A significant portion of his work explores the potential interweaving of links among sound, space, and light.

As a saxophonist, he has participated in various classical, contemporary, and experimental music projects, and has performed under the baton of conductors such as Valery Gergiev, Pierre Boulez, Neeme Järvi, Gianandrea Noseda, and Matthias Pintscher, as well as working with composers such as Heinz Holliger, Peter Ablinger, Jean-Claude Risset, and Tom Johnson.

He has received fellowships from the UBS, Irène Dénéréaz, and Nicati-de Luze Foundations, as well as from the Association Suisse d’Entraide Sociale et Culturelle. He is one of the founding members of the quartet Too hot to hoot? and of Duo Ekla, with pianist Violaine Debever.

His works are published by Alphonse Leduc Paris, BabelScores, and Note en Bulle.

In 2019, his Cursus composition Pas de deux (2016) was performed at IRCAM’s ManiFeste festival.