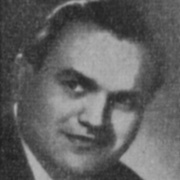 Kazimierz Serocki began to study piano at the age of four with Maria Drzewiecka in his hometown of Toruń, Poland. Passing through the Conservatory of the Pomeranian Music Society in Toruń, he completed his studies in 1946 at the State Higher School of Music in Łódź in the piano classes of Stanisław Szpinalski and the composition class of Kazimierz Sikorski. In 1947, through the advocacy of Sikorski and the Polish Minister of Culture and Arts, he received a scholarship to study for a year in France, which he did with Nadia Boulanger for composition and Lazare Lévy for piano. Not very interested in the neoclassical conception of composition, Serocki familiarized himself with dodecaphony and the work of Béla Bartók.

Upon his return to Poland, he joined the Polish Composers’ Union. His participation in a 1949 conference of composers and musicologists in Łagów yielded a creative alliance with Jan Krenz and Tadeusz Baird, whose pieces he would perform and with whom he founded Group 49.

The 1950s affirmed Serocki’s status within musical circles. He began to work as a film composer and wrote the music for nineteen films, including animated films and documentaries. He collaborated with the director Aleksander Ford, for whom he composed the music for five films, including Youth of Chopin (1952).

Serocki deepened his involvement in the Polish Composers’ Union, holding various positions within it and participating in the creation of the Festival of Polish Music held in 1951 and 1955. Together with Baird, he initiated the creation of the Warsaw Autumn Festival in 1956. Although he left the Festival in 1974, his career remained closely linked to it: by 1981, there had been twenty-four performances of his works at various editions of the Festival. In 1974, he was appointed by the Minister of Culture and Arts as a member of the Commission for the Evaluation of Feature Films at the Central Board of Cinematography, and from 1975 to 1978, as a member of the State Prize Committee.

On three occasions, from 1957 to 1959, Serocki was part of the Polish delegation to the Darmstadt Summer School, where his Musica concertante (1958) and Symphonic Frescoes (1964) would be premiered. Promoted by German musical institutions (the WDR and SWR radio stations commissioned five pieces from him), Serocki’s works appeared in the 1959 catalog of Moeck Verlag. From his ties with this publishing house, which was also a wind instrument manufacturer, Serocki brought home various recorder models. These became the source of compositions such as Impromptu fantasia (1973), Concerto alla cadenza (1974), and Arrangements (1976).

Serocki’s output is focused primarily on orchestral music and pieces for instruments and voice, including song cycles based on contemporary Polish texts by Julian Przyboś, Konstanty Ildefons Gałczyński, and Tadeusz Różewicz. As the press of the time noted, Serocki spoke very little about his music, neither giving interviews nor paying attention to what was being written about his work. In Essen in 1965, in the conclusion of one of his few lectures, he stated his hope: “If a composer is not convincing through his music, no words he will utter will help. I have uttered many words here. Since words are not enough, before the end of my life I would like to compose a work that would be totally convincing as music.”1